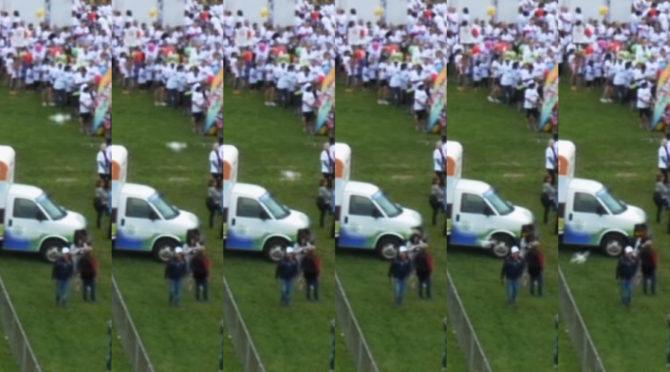 In another instance of drone operator stupidity, 38 year old Stephanie Creignou was seriously injured when a 2.8lb (1.3kg) drone dropped from about 33ft (10m) in the air straight into her head with a velocity of around 25mph (11m/s) during the Challenge 5km Arc-en-Ciel race in Beloeil, Canada.

TVA reports that the operator of the drone, Rosaire Turcotte, had been previously warned about his reckless flying, flew much closer to the crowd than was allowed, and didn’t have the required permits to fly his DJI Phantom 3 at the event in the first place.

According to reports, the impact was so severe that Creignou collapsed into the arms of her friend, which you just make out in the video, and was quickly taken by emergency ambulance to St. Hyacinthe Hospital, where doctors diagnosed whiplash.

Whether for recreational or commercial purposes, drones are subject to strict regulations from Transport Canada, one of which stating that no machine can be used within 9km of an airport.  In this particular instance, two airports fall within that range; Beloeil and Saint-Hubert.

The incident happened on June 11th, and as well as potentially facing fines and charges for his illegal drone use, Turcotte is now also being sued by Creignou, too, as she has been unable to work since that time.  Reports indicate that the she and her husband also had to cancel a vacation.

Doctors are expected to review Creignou’s condition at the end of the month, but it is unknown how long before they will decide that she is able to go back to work.  We hope that she recovers quickly.

Other licensed drones were flying at the event, under the supervision of VTOL X Drones, a company hired by the organisers of the event to document the occasion.  It was they who captured the footage above.

Incidents like this are why the recently announced regulations by the FAA specifically instruct no flying over people or crowds that are not complicit in the production.  While some are complaining that such a restriction limits their creativity, one hopes that common sense would prevail.

Drones are becoming safer with each new generation that is released, and for the potential “dropping like a stone” kind of flight that no drone owner wishes to experience but may happen anyway, there are already options out there, like parachutes (thanks for the reminder, Sean!).

Do harsh drone regulations make a difference if people are going to ignore them anyway?  Should the punishments for breaking the rules be more severe?  Or only if the rule-breaking causes injury?  Let us know your thoughts in the comments.

Update June 28th, 2016 : This post was originally titled “Woman’s head saves drone from crashing straight into the ground at 25mph”.  Title changed at the request of the person who shot the footage shown above.