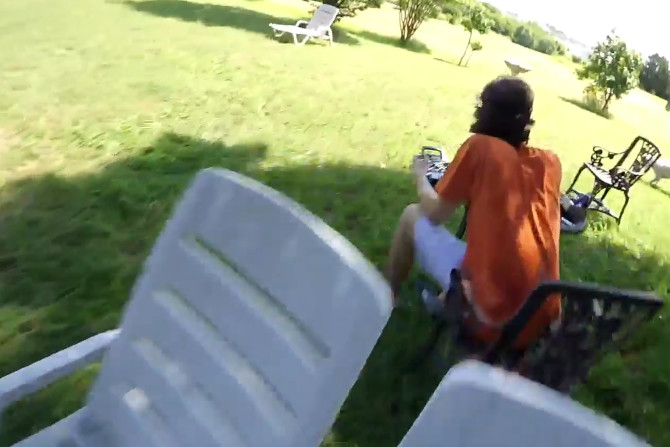 Knowing that any crash can put them at risk of even more restrictive rules, especially if a person is hurt, responsible operators make sure they follow the guidelines and take the necessary precautions.

One FPV (first-person view) mini quadcopter operator, who goes by the name doctorsnaketown on YouTube, discovered the hard way that there’s a risk even when flying outdoors with no other people around… as he flew the drone directly into the back of his head.

Luckily for the pilot the drone was a small ZMR 250 often used for racing, and not one of the larger models.

Despite having a built-in camera and a live video feed, enabling his to see his flight path, the operator either failed to notice that the drone was heading directly towards him or didn’t manage to react in time. Well, there’s also the possibility that the drone was out to get his owner, but after the Volkswagen killer-robot incident we’d hate to promote hysteria.

“A little slapstick lap where I boomerang max speed into my own noggin! Luckily, I did not hurt myself, other than a bump on the head”, doctorsnaketown wrote. “Be safer than me! I am going to revamp my pilot seating zone once my head feels better ;)”

As it turns out, there are quite a few videos out there drones crashing into their operators and I must admit some are rather amusing.

This video below, aptly titled ‘Arse Crash’, shows a Mini Spider Hex fly around for a bit before completing a full circle and crashing into the pilot’s right butt cheek:

While the two pilots above have demonstrated certain flying skills and took their drone for a spin before self-crashing, this guy didn’t waste any time:

« Standing up for the concert photographer, by standing on his neck
Using A Homemade Concave Macro Diffuser For Shooting Insects »