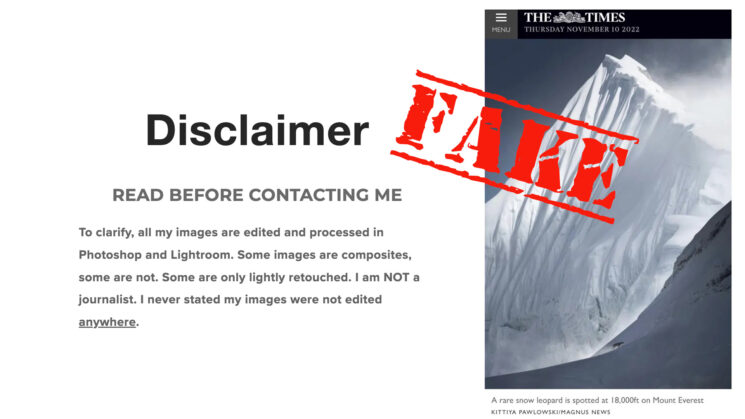 I do love a bit of a storm in a teacup, especially when it gets the photography world a little bit ignited. This story definitely fits the bill, with salacious references to faking images, fabricating stories, misleading some of the world’s biggest publications, and even accusations of impersonation. Naturally, I am intrigued.

This last month, a photographer named Kittiya Pawlowski (Surely the name should have been a clue?) published some breathtaking images of a snow leopard wandering through the Himalayas. And not just any old Himalayas, but none other than Everest. Yes, one of the world’s rarest and most elusive large cats just happened to stroll in front of the lens of an otherwise unknown photographer in the world’s most remote location. It sounds too good to be true.

There’s a saying in the UK: “If it sounds too good to be true, it probably is.” Nonetheless, several large media publications, such as The Times and our friends at PetaPixel, picked up the story and published the images. The photographs were accompanied by a lengthy and detailed account of how Kittiya trekked 103 miles through the mountains of Nepal in order to capture these images. 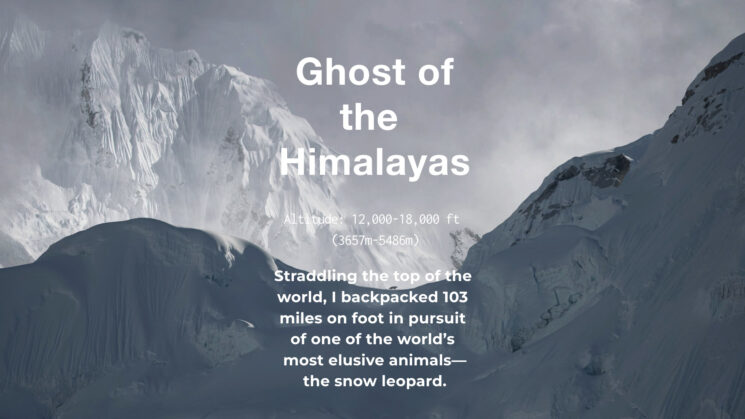 Clues in the snow

The story was well written and rather captured the imagination. If only it wasn’t just that: imagined. That’s according to French online magazine Alpine Mag at least. They smelled a rat early on and this week published a lengthy argument about why they thought that Pawlowski’s images were fakes.

Alpine Mag gives several reasons for this deduction. After studying various images of the Himalayas, they have allegedly found evidence of the mountains in the snow leopard images being composites. Their article gives several convincing pieces of evidence for this.

The images of the “American photographer” present strange lighting and collage effects that evoke photo-montages. Doubtful in front of this bundle of doubts, we analyzed his images.

The second clue is from wildlife photographer and mountaineer Vincent Munier, who has himself spent years studying snow leopards. He commented to Alpine Mag, saying that “the incredible side to these photos jumped out at me right away.” Despite its name, the snow leopard is apparently not usually seen in snowy regions.

“Mountaineers traversing the region for almost three decades have, for the most part never caught a glimpse of it,” states Alpine Mag. “Those who know wildlife photographers passionate about the snow leopard know how difficult the animal is to see.”

Indeed, I’m brought back to remember some behind-the-scenes footage at the end of one episode of the BBC’s groundbreaking documentary Planet Earth. The filmmakers literally spent months living in a hut in India, tracking and waiting for a mere glimpse of the beast. They were rewarded with some beautiful footage, eventually. But the cameraman admits just how lucky they were, even with local guides, months of planning, and the use of camera traps, to capture that footage.

The final part of the puzzle is that of the American photographer herself. Now, if the Bond-girl name wasn’t enough to raise flags, then her social media accounts (which have since been suspended) possibly should have offered some clues. It’s the lack of images on them. There are just the few snow leopard images and a couple of portraits of the photographer on location in the Himalayas, both of which look slightly composited.

On Pawlowski’s website, she has links to images that have won awards or been runners-up in awards such as the Sienna Awards. However, the links to these images are somehow no longer there. There is, however, one beautiful underwater image apparently shot in Indonesia. However, now the veracity of that image is also called into question.

But really, does this all matter?

In a statement on Pawlowski’s website, she has received threats over the images, which of course we can never condone. In response she has removed her social media accounts and retreated, saying that “all my images are edited and processed in Photoshop and Lightroom. Some images are composites, some are not. Some are only lightly retouched. I am NOT a journalist. I never stated my images were not edited anywhere.” She has since apparently donated over $700 to the Snow Leopard Trust.

My opinion is that yes, it actually does matter, for several reasons. Firstly, there is a strong ethical code that should be adhered to with any sort of photojournalism. Pawlowski tries to avoid culpability by denying that these images are photojournalism, however, her ‘story’ implies otherwise. If that story is fiction and the images that accompany it an artistic impression, then that should be clearly stated.

And then we must consider intention. Authenticity is an overused buzz word today, and nothing really sells without a story. Even the supermarket granola cannot exist without relaying its origin story of how in 1947, Aunt Marge discovered that mixing cat litter with raisins actually tasted pretty darn good. It’s a marking ploy, but it can backfire when we discover that it’s just a smokescreen, designed to sell more things.

The blues singer/songwriter Seasick Steve found out the hard way a few years ago when it was revealed that his hard living on-the-road-ways were actually all made up, and he was a successful LA session musician. Because being a talented but vaguely boring studio musician for hire doesn’t sell. And neither does “I composited some images of mountains together and stuck a snow leopard in it for good measure”.

The actual plight of the snow leopard must also be taken into account. Fabricating a story of discovering one in the wrong habitat does none of those creatures a favor. They are a protected endangered species, and their habitat is under pressure from climate change and other human factors.

Wildlife photographer Tom Mangelsen has campaigned for years for wildlife photographers to disclose whether the animals they are photographing are wild or in captivity. His main point is that as human forces encroach more onto wildlife and wild spaces, the need for depicting wild animals in their natural habitats becomes even more important.

How can we possibly appreciate the true beauty of something so fragile if we inherently understand it to be unreal? Why would we fight to preserve such a thing if we cannot acknowledge the reality of its existence?

Let’s take this angle to its extreme: “There’s no need to protect elephants in Africa because hey! I can create a beautiful image of an elephant using Dall-E. The elephants are fine, no cause for concern. Look, there are herds of them in the meta-verse!” This is certainly not the world I intend to leave to my children.

Now we cannot ignore the other elephant in the room, and that is the ease of image manipulation, AI, and deep fakes. We’ve reported recently about AI images winning art competitions, and of the potential for major disruption in the creative industries. Those are other very worthy discussions, but I do want to touch on the point that we are living in a world where we are bombarded with “alternative truths”. Can we not, for once, enjoy something real?

This is the reason why this story didn’t sit well with me. The Godfather of virtual reality, Jaron Lanier, once said: “after having been in the reality that is manmade…to behold nature is directly beholding Aphrodite; it’s directly beholding a beauty that’s intense in a way that just could never have been perceived before.”

And that is why it matters. You cannot pass off an artistic composite created at your computer and claim that it is a real living wild animal. Photography has long been both an art form and an agent for change, both in the human and natural world. Claiming that a composite image is real, further downgrades the value of photography.

The Value of Social Media Followers: Does It Matter If They Are Real or Fake?