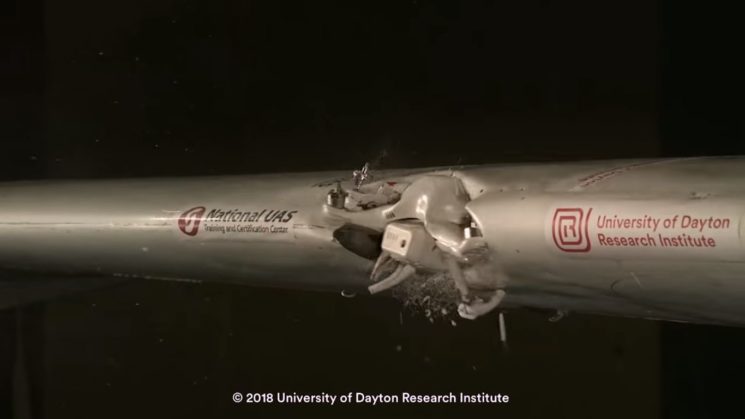 University of Dayton Research Institute (UDRI) recently published a video showing what happens when a drone hits the wing of an airplane. DJI claims that the video is unrealistic, misleading, and damaging to the company’s reputation and to the drone industry in general. Consequently, they demand that UDRI withdraws the video immediately.

DJI claims that UDRI staged the video to create a scenario that’s unrealistic and “inconceivable in real life.” First of all, the tested speed is higher than the combined maximum speed of the drone and airplane, DJI explains. It adds that this speed is also faster than FAA’s testing guidelines. Furthermore, DJI claims that UDRI has not disclosed its testing methodology or the resulting data. Even though it acknowledges that a simulated bird can cause “more apparent damage,” UDRI has only promoted the video showing damage from a drone.

Various impact scenarios of drones and airplanes have been tested before. DJI mentions ASSURE, which has “set the standard for this work by releasing detailed reports with careful documentation of their testing methodology and hundreds of pages of data.” On the other hand, UDRI’s test results are limited in detail. This “prevents anyone from determining other flaws in [their] methodology and conclusions,” DJI writes.

In a letter sent to UDRI, DJI claims that the “unbalanced, agenda-driven research” does great harm to DJI and to drone industry in general. According to DJI’s letter, policymakers have responded to media coverage of UDRI’s research by proposing and enacting new restrictions on drone ownership and use.

Because of all this, DJI is demanding that UDRI removes the video and the accompanying blog post that shows the impact of a drone on an airplane wing. They also want UDRI to issue a corrective statement to the public and to media outlets and acknowledge that “the configuration of the test was invalid.”

While UDRI’s research may be incomplete or misleading (at least according to DJI), this doesn’t mean that a collision between a drone and an airplane will be harmless in all situations. The number of drones in the sky is increasing, and some collisions have already occurred. I believe that there are different factors that could lead to a serious damage, but if a bird can cause damage and force the emergency landing… Someday soon, a drone might, too.

Of course, this doesn’t mean we should ban drones completely or anything that radical. But flying responsibly and within limitations should be enough to avoid chaos, damage, and accidents.

This is what happens when a drone hits an airplane

« Five innovative ways to isolate the subject in your photos
Photographer captures engagement at Yosemite, uses social media to search for the couple »