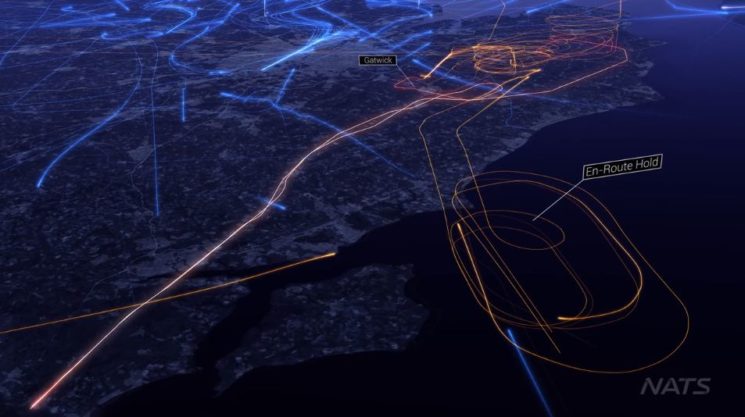 On July 2nd around 5 p.m., a drone was spotted flying near Gatwick Airport in the UK. We all know it’s forbidden to fly drones near airports, but maybe we’re not aware how much of a chaos it can cause. A recent visualization from NATS shows exactly how big the disruption was.

The runway was closed for 14 minutes and all the arriving flights were directed away. Although 14 minutes may not seem much, when you look at the visualization, you can realize how much mess a single drone near the airport can cause.

Out of the 14 minutes in total, the runway was closed two times. The first time the drone was spotted, it was closed for nine minutes. During this time, new arrivals were kept waiting in one of two holds. As time went by, the number of aircrafts waiting was increasing, as they were circling near the airport. Some of them were running out of fuel, so they diverted.

After the first nine minutes, the runway was reopened because there was no drone to be seen anymore. But shortly after, the drone was for the second time, so the flight control suspended the flights again. Several flights diverted to alternative airports because they were uncertain when the runway will reopen. There was also an additional en-route hold activated. After five more minutes and further inspection, the runway was open to arrivals again.

As Business Insider writes, although the runway was closed for “only” 14 minutes, the consequences lasted much longer and extended into the evening. Maybe it’s difficult to imagine how much disruption a small drone can cause. But I think this visualization makes it easier to see how responsible every drone pilot is for others, and why you should respect the rules and keep your drone away from the airports.

There was recently the first case of a drone crashing into a plane. It ended well, but it may not be the case next time. And even if the passengers land safely, a single drone delays their flights and makes a huge mess in the flying schedule. As NATS points out, “if you’re operating a drone, you are a pilot and it’s your responsibility to fly safely.”