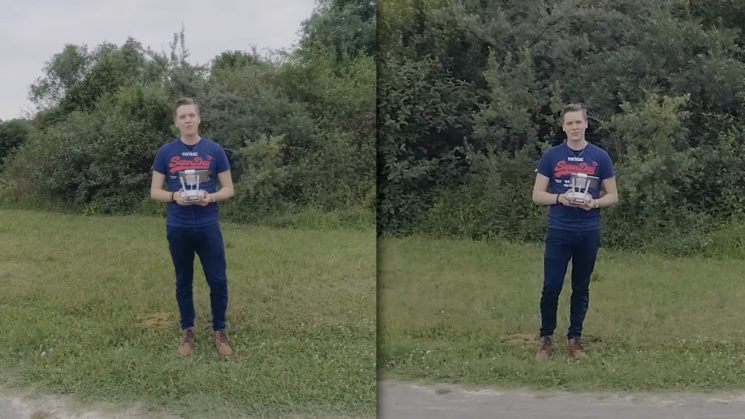 The Hitchcock zoom, Vertigo effect, dolly zoom, it has a bunch of different names depending on who you ask. But it’s all the same thing. Moving the camera away from your subject while zooming in. Or, bringing the camera closer to your subject while zooming out. It’s a very difficult technique to master, but today we have digital options to make life easier and simulate it in post.

In this video from Tom’s Tech Time, we see one way to create this effect using footage from just about any drone. Of course, the higher the resolution, the better the overall quality will be, but the principle can be applied to any of them.

Creating the effect in post using an application like Premiere Pro or After Effects is much easier than trying to do it in camera. And it’s certainly cheaper. There aren’t many drones with zoom-capable cameras out there. The ones that are available are pretty expensive, and the camera is an extra purchase on top of that. And just to show that it can be done in-camera with a drone, check this out.

To do it digitally with standard consumer drones like the Phantom 4 or Mavic Pro, though, is pretty straightforward. Essentially, you just shoot, and move the drone closer to or further from your subject. Then with the footage on the computer, you adjust the scale in post to keep your main subject roughly the same size throughout.

In the video, Tom shows the process using Adobe Premiere Pro. After importing your clip, drag it onto the timeline and cut off any jerky bits at the beginning and end. What you do next depends on the direction in which your drone is moving. If it’s getting further away from your subject, you need to zoom in as the footage plays. If it’s going forwards, you need to zoom out.

In this case, Tom’s footage has the drone moving backwards, away from the scene, so he zooms in. He starts at 100% setting a keyframe, with another keyframe at the end scaling the footage to 150%. And when played back it looks a little something like this.

The next clip shows the reverse, with a drone moving toward a subject. In this case, the scale is keyframed to start higher at 150% and end 100%.

Zooming digitally is fundamentally the same as zooming optically, except that you lose quality the larger you go. If your footage is larger than your final composition, though, you’re often not losing any quality at all.

You can also use this effect with larger cameras on the ground, although it’s much more difficult to keep focus with a larger sensor.

How to create the dolly zoom effect without a zoom lens

« Coloring shadows can make your photo, this is how you do it with gels
The latest photos of Jupiter via Juno are amazing »