For anyone who has ever seen those shots where it looks like the subject of the scene stays the same size but the background recedes away, this video is a quick tutorial that explains how to achieve the shot in camera.

The video above is more detailed but here is the summary.

First you’ll want to know how to do a hyperlapse or at least the idea behind them. If you aren’t familiar with the technique it’s basically using a tripod as a dolly without a track. You take a photo, move the camera forward a little, take another photo and repeat the process many times, then stabilize your footage with a program like Adobe After Effects. If you need a more detailed description you can check out this article on DPreview. 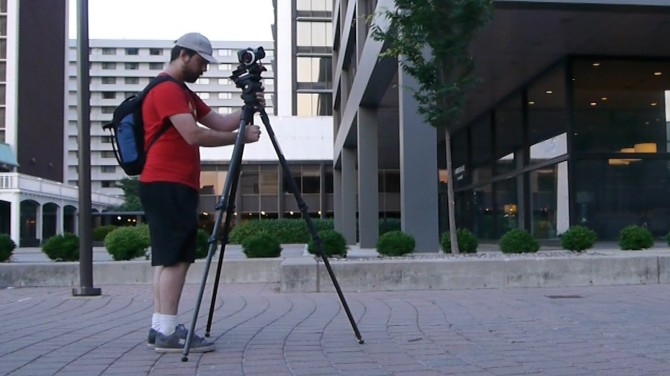 When I get to an area that I think will make for a good dolly zoom I’ll raise my camera to eye level since I’ll be picking up and moving the tripod about one hundred times. I also will almost always use an ultra-wide zoom lens since this will really emphasize the effect. In this case I used a Panasonic 7-14mm lens which on a full frame sensor would be a 14-28mm.

Next I’ll take three sample photos of the scene. I start back pretty far from the subject of my scene and zoom all the way in on the lens. I then walk forward quite a bit zoom out about half way take another photo and finally walk forward again and zoom out all the way.

These are from the final video. When doing my test shots I had initially started to close to the building on the right and would have ended up cropping most of the top of the building off. Doing test shots is very important.

Once happy with the test shots, the rest of the technique is pretty much the same as doing a regular hyperlapse while moving towards your subject. The only difference is that you will be zooming out almost unperceivable between each photo. This can be done by twisting the zoom with your hands but I’ve found that using a follow focus as a zoom controller makes this process easier since the zoom increments are so small. 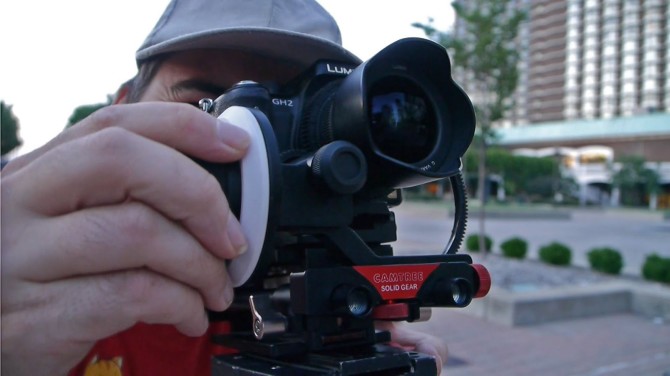 The follow focus I used as a zoom controller is the CAMTREE Solid Gear Follow Focus. While it doesn’t offer the focus stops the higher end products have, it is much more affordable and works well for the vast majority of shooting.

Other than zooming out I put my camera in autofocus for this type of a move since most lenses not designed for video aren’t parfocal and won’t hold focus when zooming.

Once you’ve run out of your zoom range you can either stop your hyperlapse or continue on as you would for a regular hyperlapse. I recommend making sure you have at least 100 photos before quitting the process though. With 100 photos the resulting video clip will be just a little over four seconds in length if playing back at 24 frames per second. To get an idea about the time you should expect to commit to this, the video in the tutorial ended up lasting about five and a half seconds and from my first shot to the last took 35 minutes not including test shots.

Eric Stemen is a videographer based in Louisville, USA. He has an awesome vimeo account here and a timelapse site here.

How to create the dolly zoom effect without a zoom lens

Hong Kong short film mixes amazing timelapse, hyperlapse, realtime and reverse footage
« Can A Strobe Stop The Action? Profoto D1 Air, Elinchrom BRX500, Photogenic And Broncolor Compared
A Small YouTube Tutorial on How to Clean Your Camera… of Any Life it Has Left »