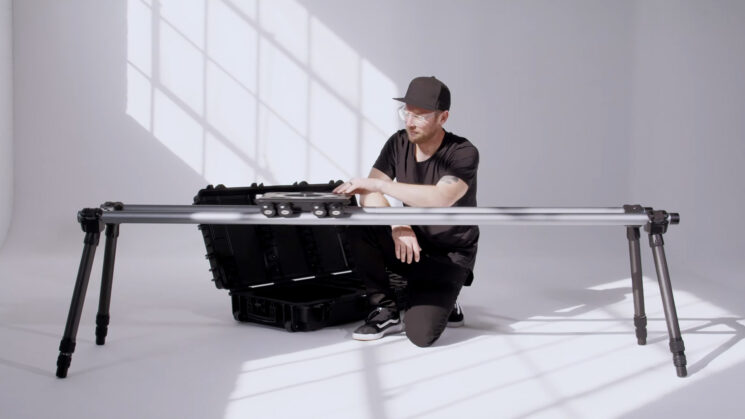 Popular manufacturer of motorised motion control camera sliders, Rhino Camera Gear has launched their new Rhino Dolly. Its release is in response to what Rhino Camera Gear says is customer demand for longer rails and higher load capacities. And they sure seem to have satisfied both of those requests with a motorised dolly that provides up to 10.5ft of length and a total claimed load capacity of up to 100lbs (~45kg).

There are some caveats with that load capacity, but whichever way you slice it, it’s way beefier than anything they’ve released before. The whole thing fits inside a single case – if you’re not using the carbon fibre legs to raise it up, and it’s designed to be put up in mere minutes. The team at Rhino says their best time so far is an even 60 seconds. But for some strange reason, they launched on Kickstarter.

The slider can both be pushed by hand or it can be controlled by a motion control motor to capture smooth and repeatable shots time after time. You can mount the Rhino Arc II 4-axis motorised pan/tilt head on top of it to add a fifth horizontal translation axis into the mix, too. While the kit comes with a 10.5ft length, Rhino says that it’s essentially an infinitely expandable system. All you need to do is bolt on more rails and then add another support every 7ft.

With all this length and weight capacity, you can’t just balance it on a tripod or two and call it good, so it comes with a set of four extending carbon fibre “Quick Legs” that allow you to quickly support it on any kind of terrain, even if it’s not flat. Each leg unlocks and adjusts its length with a similar sort of system to your typical twist lock tripod, except they’re thicker than most tripods and contain fewer segments to minimise bend and wobble. Fully extended, the mount on top is ~54″ high and fully collapsed, it’s ~24.5″ high.

And that mount on top is a 100mm bowl-mount with a 3/8-16″ stud on top, allowing you to use your favourite fluid video head or the Rhino Arc II mentioned above. It can tilt up to 10 degrees in any direction to keep your camera level on an uneven or angled surface. A tightening knob underneath the carriage features a second 3/8-16″ thread for when you want to mount the camera below in “underslung” mode. I wouldn’t try underslung if you’re extending with supports every 7ft, though. 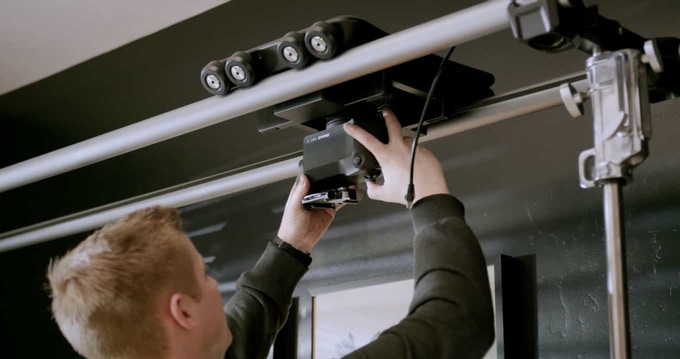 Quick-lock end plates allow for rapid deployment when required and fit Rhino Infinity Rails, US or Euro Speed Rail or 1 1/2″ EMT. The end plates also feature built-in bubble levels so you can confirm everything is level before you lock it all down. These end plates also double as feet when you want to get your dolly low down to the ground without the carbon fibre Quick Legs and while a tripod isn’t the best thing to mount this to, it does feature a socket for screwing it onto a tripod.

Four locking Arri mounts on the top of the carriage allow you to easily mount accessories like monitors, audio recorders and other devices separately from the camera rig itself. And this is where the load capacity things come into play.

The Rhino Dolly with carriage and end plates weighs 23lb and provides 100lbs of load capacity. You get to keep this 100lbs load capacity even when using the 7ft rails, regardless of how long your dolly ends up being, as long as you have those supports every 7ft. When you add the carbon Quick Legs, that drops to 75lbs when they’re at their shortest (~24.5″) and only 30lbs at their highest (~54″). Once you add the Rhino Arc II on there, that drops to 25lbs for pan and slide or 15lbs if you want pan, tilt and slide. So, do bear this in mind when figuring out what camera rig you want to use with this in its various configurations.

One neat, but purely aesthetic feature being offered with this gimbal is custom branded engraving to make your dolly truly your own. It’s available as an extra option on checkout and while it might seem a little vain at first, I bet having your name physically embedded into it will come in handy in the event of theft!

And speaking of checkout, Rhino has decided to launch this one on Kickstarter for some strange reason. They’re a pretty established company that could just announce it, pop up a pre-order and start getting sales, so why they’ve gone the Kickstarter route is anybody’s guess. Using it as a marketing gimmick isn’t really as effective as it once was, since everybody seemed to start doing it a couple of years ago and now just seems to put people off buying more than anything – now that everybody is aware of the whole “You’re not actually buying anything when you back a Kickstarter project” thing.

They say that these are discounted prices for the campaign. No word on how much it’ll cost once it goes regular retail. Shipping is expected to begin in December 2022.