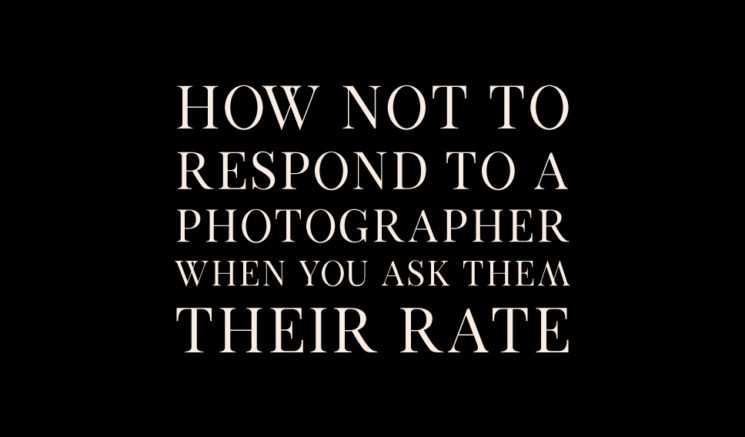 I always say that if you want to see creativity, ask a photographer the various ways potential clients will respond back to rate requests. I decided to turn that into reality!

I asked photographers the worst stories they had with potential clients responding back after being asked what their rates were. I promised to keep the responses anonymous so they could let loose. Sadly, it happens to even some of the best photographers.

The point of this is to make you realize that you’re not alone. It’s a part of the industry. I think in time, it gets easier to handle knowing that it doesn’t necessarily have anything to do with you, but how awful people can be sometimes. And hopefully, by sharing this, people will know that it’s really not cool to act like this!

I decided to collect the *best* (of the worst) 35 responses and here they are below:

2. “Did you accidentally add an extra zero?”

3. “Do you know anyone cheaper?” -sends list of people who charge twice as much.”

5. I was asked if I could provide a discount because he was a gay father of two. I replied back if I could get a bonus for being a single mom of four.

6. Someone once wanted to give me a used Coach purse to shoot their wedding… They said I could use it in my fashion shoots…

7. The best response is when someone comes back to you cause they realized that they get what they pay for.

8. They said, “I’m a wedding photographer and I would never charge that much”… lol, then who’s the smart one here?

9. Me: Shoots half of a designer lookbook
Client: Has husband shoot other half of lookbook to save money
Client later emails: Can you retouch theses to look like yours?
Me: It would have been cheaper and of better quality if you just had me shoot the entire collection in the first place…

10. One time LA Tan tried to give me unlimited tan for a year in exchange for a billboard. LOL money>skin cancer.

11. I once told a would be client, “last year I went to the bank to pay on a loan with my photo credits.” He just laughed at me and said, “Son, the real world takes real money!” Long silence, then he said, “Oh so you would like to get paid?”

Yes, yes I would!

12. I had a very big company ask me to do hair and makeup for 25 people for a commercial shoot. When I quoted them my day rate and kit fee for that, they wrote back asking if I would consider cutting my rate by half but getting paid in socks. SOCKS! SOCKS!!!!!!!! Since when do socks pay the bill? WTF?

13. My favorite was from trying to price re-licensing of an editorial picture to a client for commercial use:
“…why don’t you just give it to us, we know they’ve (the original magazine)already paid you….”

14. Literally “HAHAHAHAHAHA”, entirety of the email.

15. “Your work is much better than who we usually use. She charges $75 for a session including all files, but we would pay you double that.” -_-

16. Someone asked for a print of one of my images and when I told him the price he said, “I’m not paying that for something that costs you a dollar at Walgreens!” He then followed that up with, “I’ve done some photography and I know how much prints cost.”

17.  “Lol” – always from models who expect/are accustomed to not paying.

18. “Okay, thanks.” Followed by an immediate post on the newsfeed from her of “Looking for a CHEAP photographer.” I laughed. Really wasn’t that much for what she wanted, honestly.

20. “I’ll have my intern shoot instead. They have an iPhone.”

21. Best thing I ever heard ever, “It’s really not fair that you think you deserve that much money.”

22. Non-payer: “To push a button? I like your images and all, but you’re not THAT good! I can get (insert friend/bartender/neighbor/priest here) to do it for me. He/she has a camera. It’s not like it’s that hard.”
Me: Cool. Please do!

23. “Oh, I thought you were going to pay me!! You know that’s how it works!! Photographers pay models to shoot!!!”

24. *After giving full list of rates*
“What’s your cheapest?”

26. Got a call from OWN, an actress I photographed was on a new show and they wanted to use my photos in promotion. “But there is no budget for the photography.” “Oh I’m sorry, is Oprah a little tight on cash?”

27. I actually had a model give me a pure shock face/response… “Rates? But… I’m… I’m really pretty you know?!”

28. “But what about the exposure you’ll get from shooting for us? That’s worth more than what you’re charging.” Lady, exposure doesn’t pay my bills, hahahaha.

29. “Oh you’re way over our budget… unless that changes?”

30. “Omg I love your work SOOO much! how much do you charge? I’d LOVE! to shoot with you!”
Here are my rates ____
*Reads message and never replies again*

31. When they don’t want to pay for your services with cash… but with their body. I’ve gotten so many clients who respond this way and it’s honestly extremely sickening.

33. It drives me insane when a client will try and compare me to other photographers asking why I charge more? As if there’s only one rate for photographers!?

34. “I thought we could test so you could update your portfolio.”
I update my portfolio everyday with new clients lol.

35. I once told someone my rates for a headshot session and he responded with, “I totally thought it was gonna be around $10.”

Pratik Naik is a high end retoucher, photographer, and retouching teacher under his Solstice Retouch brand, he also runs the succesful retouchist blog.  You can catch Pratik on social media on his Instagram, tumblr, twitter and facebook. This article was also published here and shared with permission

The External Flash Power That Will Last Till Hell Freezes

Disney’s face swapping AI is fast, accurate, and creepy as hell
« 10 video LED lights for stills or video between $50-100
Change your perspective: how to add drama and power to your shots using low angle »