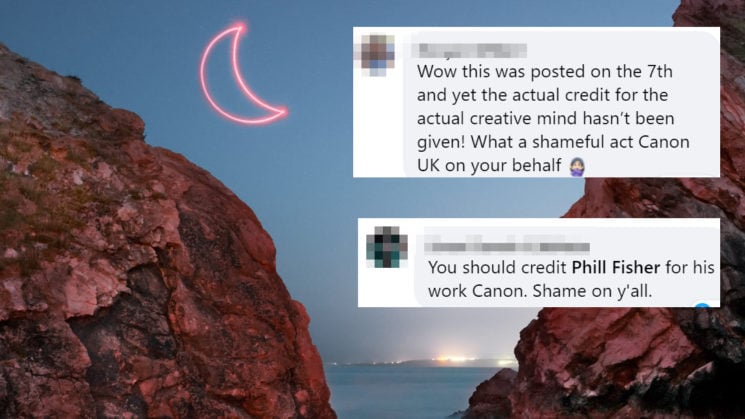 Canon UK recently got under fire for not crediting the photographer on social media. Light Painter Phill Fisher claims that he came up with the entire concept for the photo and even did some shooting for the campaign. But Canon didn’t acknowledge his contribution, which made the community angry and caused an avalanche of negative comments on Facebook.

The post from Canon UK popped up in my feed because a friend of mine commented on it. And just a quick glance over the comments made me realize that there was something fishy. I soon found Phill’s story on Jason D. Page’s website, where he explains what happened.

In short, Phill says that he got a few messages this June from people who were looking for “Drone Artists.” They said that they were making an “advertising campaign for a ‘major camera manufacturer,’” but couldn’t reveal which one until Phil signed an NDA (Non-Disclosure Agreement). Still, he discovered that it was Canon before signing, which is why he has shared the story.

“They promised to ‘hire’ me and practically begged me to go down to meet them on the southern coast of England at Lulworth Cove that evening,” Phil says. “[It’s] about an hour and a half from where I live and I have a normal day job.” He arrived around 10 pm and stayed until 3 am working with the team on the concept.

The team wanted to have a landscape photo with different shapes drawn with a drone. Phil says that he tried to explain to them that it wasn’t easy, and shared a bunch of tips with them on how to achieve it.

“So off I went and took some terrible rushed photos. And showed him examples that with more time, better results could happen, we got talking and I said basically you could bypass all this drone stuff and give the appearance of the crescent shape in the sky by using stencils and two different tripods (One for the stencil and one for the landscape). He couldn’t work it out what I meant so I showed him some example of my shots and he slowly understood. They want to hire me so why wouldn’t I help?”

After the unsuccessful 5-hour shoot, the team promised to hire Phil for the following three days and call him the next day to talk about money. However, that didn’t happen. Phil says that they did contact him after a while, but only to have him help a photographer with taking the shot and to walk him through the steps.

Fast forward to 6 November, Canon publishes the photo on its Facebook page, crediting only photographer Rob Payne. The company shared an article on multiple exposures along with the photo, but Phil’s name still isn’t mentioned anywhere. Naturally, this caused a bunch of comments requesting from Canon to credit Phil for his contribution. After all, he did spend about five hours shooting for them, even if his image wasn’t published.

“Canon UK, when an expert is called in to share his knowledge on a specialized shoot, he usually gets paid, often more than the normal crew,” one of the comments reads. “Plus of course gets credited for his contribution to the idea or workflow. Seems to me that we have exactly that kind of case here.. only difference that the expert Phill Fisher’s knowledge was used without any payment or credit.. [Don’t] you guys think you need to fix this?”

It’s been two and a half weeks since the post has been up, along with all those negative comments. However, Canon still hasn’t changed anything. To remind you, this isn’t the first case that the company has come under fire for a similar issue. In 2018, Canon Italy and Canon Spain shared a photo without crediting the photographer. The company responded to criticism with blind ignorance, and the court eventually ordered that the photo is removed from Canon’s social media pages.

Now, I personally think that it would be moral to credit the person who came up with the idea. I don’t know how the law works and if you’re legally obliged to do it, but it would simply be fair. I do know, however, that an artist should be paid for their time at least, if not for the idea as well. But please let me know what you think and how you would deal with this if you found yourself if Phil’s shoes.

We have reached out to Canon for a comment and we will update the article when and if we hear back.

Canon shares a photo on social media without crediting the photographer… Oh! And it was shot on Fuji