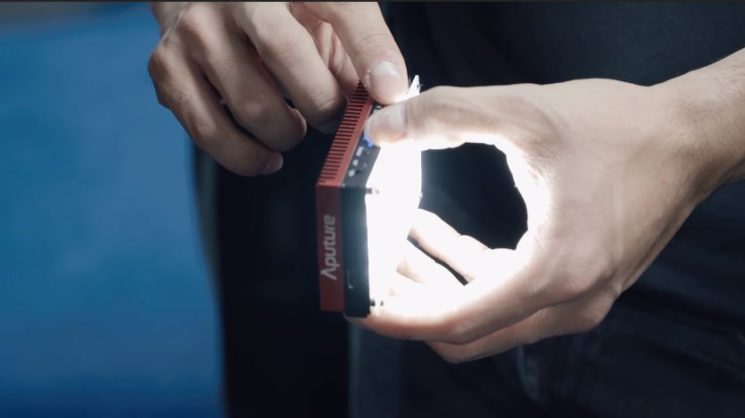 A new light is coming from Aputure soon, and it contains a whole lot of brightness in the size of a credit card. Although it’s not officially announced yet, they showed off the prototype on Cinema 5D.

The light is named Amaran MX, and despite the size, it seems really powerful. It’s five times brighter than its predecessor Aputure M9, and it comes along with some other improved features.

The Aputure MX is the same size as the M9, but twice as thick. It comes with a built-in battery that lasts about an hour at maximum brightness and about 8.5 hours at minimum brightness. It features 286 LEDs that can be adjusted from 2300 to 6800 K color temperature. The TLCI & CRI rating of the MX is 97. As I mentioned, Aputure MX is five times brighter than the M9. And additionally, it has a “booster mode” which expands the brightness even further and gives you this extra light for 60 seconds.

There’s no availability and price information yet, but Aputure’s Ted Sim suggests that they’ll release the light for about $125 to $150. Aputure MX could have a lot of applications, and architectural lighting, eye light or accent light are some of Ted’s suggestions.

Godox wants a piece of the LED market, shows an Aputure 120D-like light

« The $995 Profoto A1 speedlight is now official and here’s the first review
Upgrading to iOS11? Use this website to convert your HEIC photos to JPG »