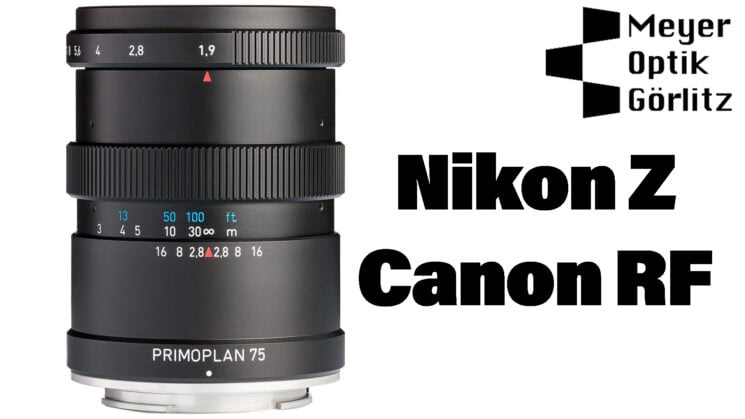 Meyer Optik Görlitz has announced the addition of Nikon Z and Canon RF mounts. The two new mounts will be applied to the company’s entire existing family of lenses, including the two models that are yet to be released.

Timo Heinze, Managing Director of Meyer Optik / OPC Optics says that the company has noticed a high demand for the native Z and RF mounts. The successful launch of the Trioplan 100 f2.8 II and the Trioplan 35 f2.8 II in these versions proved it, so the company decided to make all of their lenses available in these two mounts.

“After an intensive preparation phase, which took quite a bit longer than usual due to the extremely volatile economic situation (capacity bottlenecks, lack of resources, extreme price & availability fluctuations for raw materials, etc.), we are now especially happy about the completion of the new versions of our lenses,” Heinze says.

Even though Meyer Optik Görlitz was originally founded in 1896, it’s been a bumpy ride for the company in more recent history. The company was liquidated in the 1990s and the brand was resurrected in 2014 at Photokina, under a company named NetSE. In May 2015, NetSE created a new subsidiary, Meyer Optik USA Inc., to distribute Meyer-Optik-Görlitz brands in the US.

In 2018, NetSE filed for bankruptcy despite wildly successful Kickstarter and IndieGoGo campaigns for several lenses. Those who had supported the last campaign never saw their lenses or their money. Shortly after, Meyer Optik Görlitz came under the new ownership of OPC Optics, which is still the owner of the brand. There was another scandal when the company admitted that its $3,000 Nocturnus 50mm f/0.95 lens was just a copy of the discontinued $850 Mitakon Zhongyi Speedmaster 50mm f/0.95.

Still, in 2022, it looks like Meyer Optik Görlitz is back on its feet thanks to OPC Optics. I hope it will stay that way, and you can get your Canon RF and Nikon Z lenses on the company’s website.