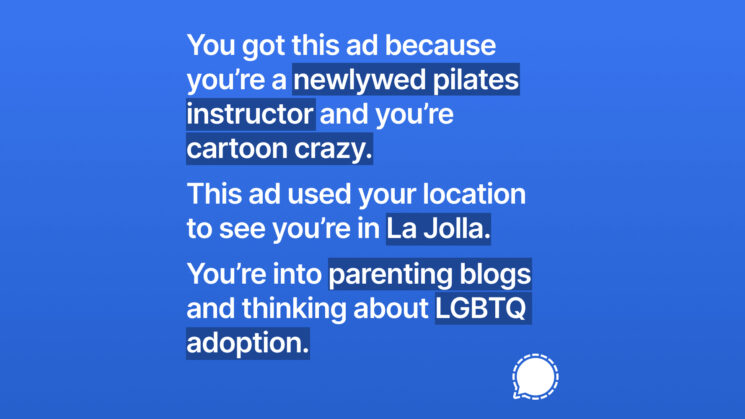 After Instagram (and Facebook) recently put out notifications in the app stating that they wanted access to your data to “Help keep Instagram free of charge“, I stumbled across an experiment by the folks over at Signal. Now, Signal is obviously a competitor to Instagram, Facebook and WhatsApp – at least as far as their messaging abilities go – but the results of that experiment are quite interesting.

They involve the personal data collected by Facebook and the services it owns and how it’s used for advertising. It allows you to target ads very specifically. This isn’t really news, as this prank from 2014 illustrates hilariously. But what is interesting is that you’re not allowed to know how and why you were targeted to see a specific ad.

The premise of Signal’s experiment was quite simple. Create an advert that targets a very specific subset of people based on their occupation, education, relationship status, location, age, hobbies, interests, etc. And then show them an ad that explains exactly what terms were used to make them see the ad.

The ads weren’t actually advertising anything. They were of no real benefit to Signal and they weren’t advertising a competing service. They were simply informing the person looking at each ad exactly how they were specifically targeted to see it. Apparently, though, Facebook doesn’t want that.

It doesn’t actually want users to know how it uses the data and what it can conclude from the information you enter, posts you make, etc. as Signal says it resulted in their ads not only not getting approved, but their entire ad account was banned. 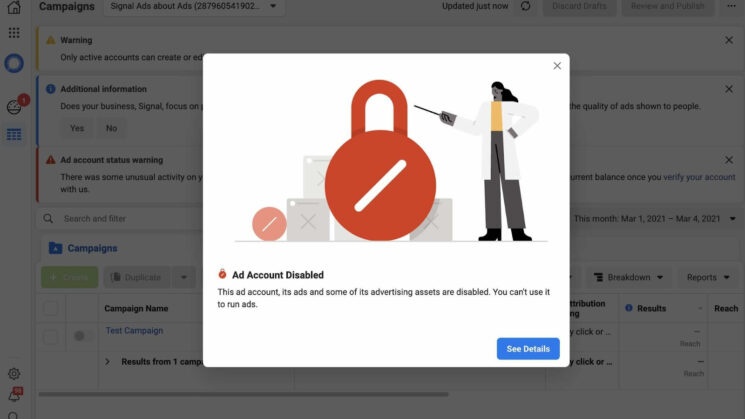 Their conclusion is a pretty blunt, but probably honest statement about how Facebook (and its other services) really feel about your personal data and how its advertisers should act on their services.

Facebook is more than willing to sell visibility into people’s lives, unless it’s to tell people about how their data is being used. Being transparent about how ads use people’s data is apparently enough to get banned; in Facebook’s world, the only acceptable usage is to hide what you’re doing from your audience.

While a bit of advertising might feel somewhat harmless, the amount of personal data that Facebook has access to – and can surmise from everything you do on the platform – is quite shocking. And we know that your data isn’t only available to advertisers. Your data just isn’t available to you.

No wonder Facebook’s so keen to scare you into handing it over.

Head on over to the Signal blog to read more about their Instagram advertising experiment and see a few more of the ads they tried to run that Facebook wouldn’t let them.

What are NFTs and can photographers really benefit from them?

Canon’s Experiment Shows How Obsessed Photographers Are Over The Details