YouTube has recently rolled out its Shorts feature across the USA, taking it out of beta. It’s YouTube’s answer to TikTok, allowing you to post videos of up to 60 seconds from your phone. It’s a handy feature for keeping your followers updated in between posting long-form videos. YouTube also pitches it as a way to allow more people to create quality original content.

But along with the rolling out of Shorts, YouTube has enabled a new feature in your video permissions that allows other people to take audio from your content and use it in their shorts. You can, of course, turn this permission off, but it’s been enabled by default on every single video you’ve ever uploaded and it’s on by default on any new ones you upload, too.

The video above from the folks at VidIQ, a YouTube optimisation service and chrome extension – which is very good, btw, I’ve been using the free version for a couple of years now – goes over the new permission and what it implies for your content, although there are still some unanswered questions. The short version is that when the permission is enabled anybody with access to shorts can use audio from your content in their 60-seconds-or-shorter videos.

The permission is checked by default on every new video you upload. There’s no way to change the default behaviour of this checkbox, so you have to manually uncheck it each time you upload a new video from now on, it applies to everybody all over the world, even in countries where Shorts hasn’t been rolled out and it’s been applied retroactively to every video you ever uploaded!

This means if you’ve uploaded a couple of hundred videos (and there are people out there who have thousands), you’re going to have to manually go into every single video individually to disable this new permission to stop others using your content. Yes, individually, because YouTube hasn’t seen fit to add the new permission into the batch edit system. And if you don’t, it means that people in the USA and India can now use your content in their Shorts, even if you’re not based in those countries yourself.

If you care about your content, who can use it and how it’s represented outside of your channel, you’ll obviously want to disable this permission for each of your videos, but you may have a struggle ahead if you have a lot of content. And don’t forget you’ll have to manually disable it for each new video you upload from now on because you can’t set that behaviour by default.

This is a terrible way for YouTube to treat its existing creators and to implement this system the way they have, especially when the vast majority of YouTube’s creators don’t even have access to the feature that utilises it because they live in the wrong countries.

You do kind of agree to let YouTube do this kind of stuff in the terms of service when you sign up, and Google’s “Don’t Be Evil” mantra went out the Window years ago, so it’s not much of a surprise that YouTube’s done this. Alphabet’s newer “Do the right thing” motto doesn’t seem to be taking much hold, either, if this is any indication. It’s a bit of a shitty thing to do, really.

Still, we allow them to do it in the license when we sign up. So, this is more of a PSA to make creators aware that his permission now exists – because for the majority of people who don’t have access to Shorts, they have no way of knowing unless they accidentally spot it way down at the bottom of the hidden-by-default “Show more” section of the settings page for each individual video you’ve uploaded.

So, go lock down this permission if you don’t want people randomly reusing your content in their Shorts without your knowledge or consent. 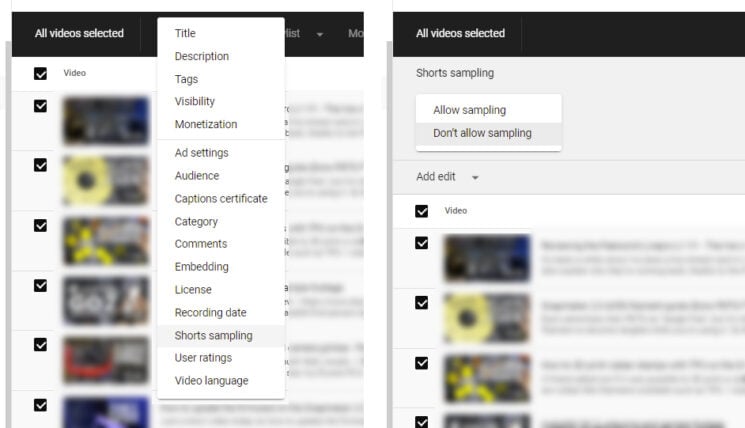 « Advertising experiment shows Instagram’s personal data collection is 100% for their benefit, not yours
Mirrorless cameras are overrated… by a lot! »