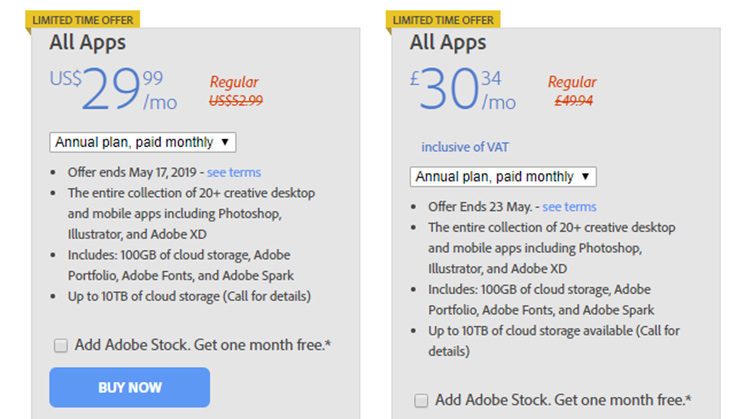 Adobe’s been getting a lot of press lately. Some good, but mostly bad. It’s caused a lot of people to become very upset, particularly people on Twitter who don’t understand what the word “subscription” means and think they’re still buying a perpetual license. Regardless, it’s bound to have lost Adobe a few subscribers.

Discounts are available on the annual packages, paid either monthly or a year up front. The month-to-month package still remains at its regular price. For US customers, this results in a saving of $240 a year and for those in the UK, that comes to a £231.12 discount.

The discount is also only available to new subscribers through the website, although I have seen several people on Facebook stating that they are able to get the discount if they call Adobe on the phone or speak to their website support. Several also say that they have had to cancel their existing CC accounts and then start up a new subscription to qualify for this discount.

So, if you’ve just quit your subscription and might be tempted back, or you’re thinking about signing up to Creative Cloud for the first time, now is the time to do it.

If you do want to sign up or check the price in your region, head on over to the Adobe website.