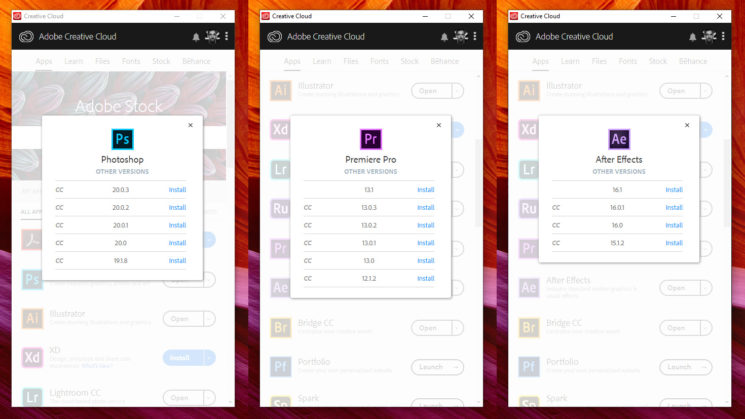 Adobe has posted a short but to the point blog post stating that many older versions of Creative Cloud applications will be removed, limiting availability to only the two most recent major versions of each (except for Acrobat – which will only allow the latest version) and their minor updates. This is an attempt, Adobe says, to help keep users updated with the latest features as well as ensure critical bug fixes and security updates are applied.

A Creative Cloud subscription offers numerous benefits, including frequent product updates with new features and capabilities, critical bug fixes and important security updates. We recommend all customers use the latest release of Creative Cloud for optimal performance and benefits.

Focusing our efforts on the latest two major releases of Creative Cloud applications, which the vast majority of Adobe customers are already using, will further enable us to develop the features and functionality most requested by customers and ensure peak performance and benefits across Windows and Mac operating systems. Business customers in need of an older version of a Creative Cloud application should contact their IT Administrator to see if one is available.

*Exception: Only the most recent version of Adobe Acrobat is available for download.

From Adobe’s position, it’s a logical decision to make. At some point, you have to let the old versions go and stop supporting them, but for users, this isn’t necessarily a good thing.

Yes, you do get those bug fixes and security updates, but many users choose to use older versions of the software due to features suddenly disappearing in newer versions, or the newer versions are simply buggy and won’t run on their system.

Sometimes they’re working as part of a team, and need to retain backwards compatibility for collaborating with CS6 users (which is no longer available to download through the Adobe Creative Cloud app). Or perhaps they really need Adobe Encore (yes, some people still need physical DVDs).

This isn’t the first time Adobe has had to remove previous versions of software, either. Last year, they had to remove several versions of Premiere Pro due to Dolby licensing issues, which caused a lot of upset for many video editors.

Adobe doesn’t say what has prompted this decision, but could it be something similar? Too many hassles with older license issues?

The good news is that if you have already downloaded and installed older versions of Creative Cloud apps, they will still continue to run just fine. But you won’t be able to get them now if you didn’t have them already. So, don’t uninstall them if you think you’ll ever need them in the future.

In other news, the $9.99/mo 20GB CC Photography plan appears to be back again and available through the Adobe website.