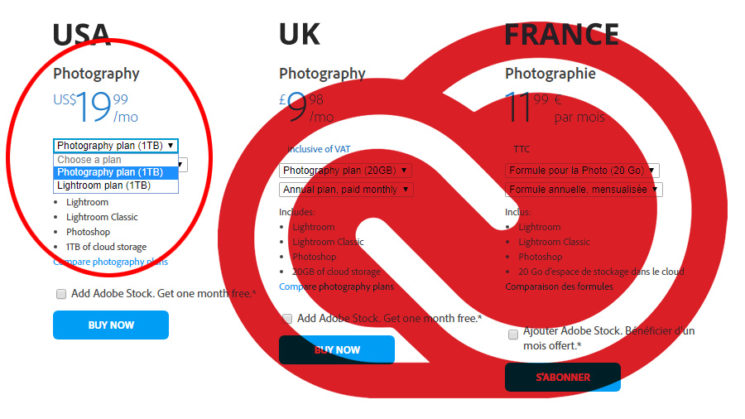 If this isn’t just a website glitch, then is going to upset one or two people. It appears that the $9.99 Photography plan for Creative Cloud has disappeared for US customers. You can still get a $9.99 package, but you won’t get Photoshop anymore. Oh, no. For that, you’ll be paying $19.99 instead.

The $9.99 Photography package includes Photoshop, Lightroom, Lightroom Classic and 20GB of cloud storage. That package is still available in other countries. In the UK, it’s currently available for £9.99/mo. It’s also available to European countries for around €11.99/mo (it varies slightly from country to country). Canada, too, still lists the 20GB package as being available for US$9.99/mo. But it’s completely disappeared from the US package listings, with the package now forcing 1TB of cloud storage at twice the price, whether you need it or not.

Interestingly, the Creative Cloud Photography page for the USA region does still state that the Lightroom, Lightroom Classic and Photoshop plan with 20GB of cloud storage is still available for $9.99/mo, but clicking “Buy now” (which should be “Rent now”, to be fair) takes you to the page with the 20GB package missing.

There’s been no press release or announcement from Adobe about this so far that I’ve seen, so there’s no word on whether this is an intentional ending of the $9.99 package or it’s simply a website bug preventing the package from being shown.

If the 20GB package has truly disappeared in the USA, there’s obviously no news on whether or not those already on the $9.99/mo package will be grandfathered in at their existing price or if they’ll be forced to move up to the $19.99/mo package instead.

There’s also no news on whether we’ll start to see the 20GB package disappearing around the world in the coming weeks or months. But I’ve already seen quite a few unhappy comments on social media, with one stating “That is infuriating. I don’t even use the storage for anything. Not a single file.” and several stating that this is why they have stuck with CS6.

DIYP has reached out to Adobe for confirmation and we’ll let you know as soon as we receive a response.

Update: We’ve been told that the $9.99/mo 20GB package is still showing up as available for some users on mobile browsers, but not on the desktop.

Update 2: A user has sent us a screenshot of their conversation via Facebook Messenger with Adobe support. They say that they are currently running a number of tests in the USA and that the plan is still available during the test, even though it’s not showing on the website. 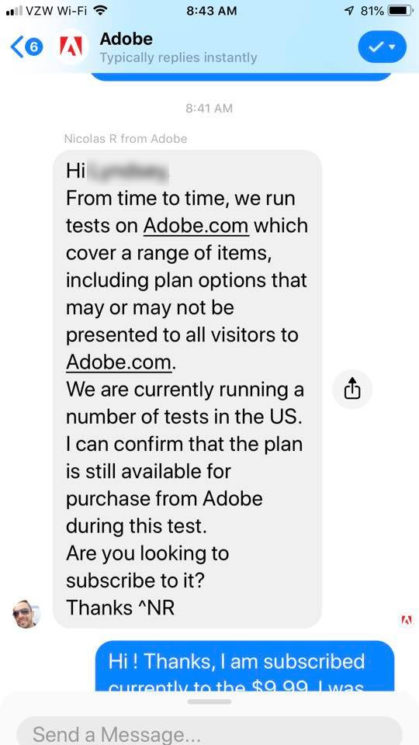 Update 3: We have now received an official statement directly from Adobe.

From time to time, we run tests on Adobe.com which cover a range of items, including plan options that may or may not be presented to all visitors to Adobe.com. We are currently running a number of tests on Adobe.com. The plan can be purchased at http://www.adobe.com/go/photo18sptst, via phone at 1-800-585-0774 or via major retailers.