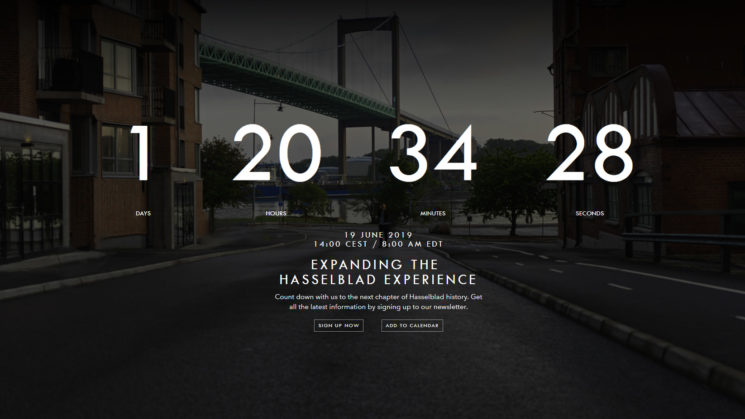 I’m seeing a little bit of speculation on social media after a new countdown timer has just appeared on the Hasselblad website. So soon after the announcement of the Fuji GFX 100, could this be the 100-megapixel follow up to the Hasselblad X1D? That’s what many believe Hasselblad will announce, although there is nothing specifically to suggest it other than the timing.

With an X1D Mark II expected to house the same 102-megapixel BSI CMOS sensor housed in the Fuji GFX100, it makes sense that this would be the next logical announcement from Hasselblad. It’s unlikely to be something in the DJI/Hasselblad “alliance”, as those things are usually promoted through DJI, not Hasselblad. So, I wouldn’t go hoping for a new Mavic Pro 2 Hasselblad camera upgrade, if I were you.

It’s probably also worth noting at this point that B&H lists Hasselblad X1D-50c as discontinued.

If it is an X1D follow-up, given the design change Fuji has taken with the GFX 100, turning it into something more akin to a full size pro DSLR like the Nikon D5 or Canon 1DX Mark II, it will be interesting to see if Hasselblad retains the X1D form factor or goes for something completely new.

After all, the X1D was billed as a lightweight compact system. The GFX 100 certainly ain’t compact.

If it is an X1D Mark II, the only things we really know about it are the sensor specs, as it’ll more than likely be the exact same Sony IMX461 sensor used in the GFX 100, as the X1D and GFX 50S also share the same sensor.

The official news from Hasselblad about whatever it is is expected to come in around 44 hours. So, I guess we’ll find out then.

If it’s an X1D successor, what specs and features do you want to see?