Considering cinema’s origin in black and white, it’s not surprising that many filmmakers have an obsession with color in films. From wardrobe choices and color gels to post-production filters and fonts, movie color schemes play a vital role in a director’s vision.

The importance of color in film

Lewis Bond’s color theory video, Color In Storytelling, posted on Channel Criswell, is not only an practical analysis of how movie color palettes enhance storytelling, but also an engaging historical recap on the maturation of color in film.

Before we begin, check out the video below.

How can color tell a story?

Simply put, color can affect us emotionally, psychologically and even physically, often without us becoming aware. Color in film can build harmony or tension within a scene, or bring attention to a key themes. When telling a story, colors can…

As filmmakers, we must choose our film palette carefully to maximize emotional and visceral effect.

The psychological effect of color in films

When chosen carefully, a well-placed movie color palette evokes mood and sets the tone for the film. The three main components of a color are hue, saturation, and value.

Hue – the color itself.

Saturation – intensity of the color.

Value – The darkness or lightness of a color. 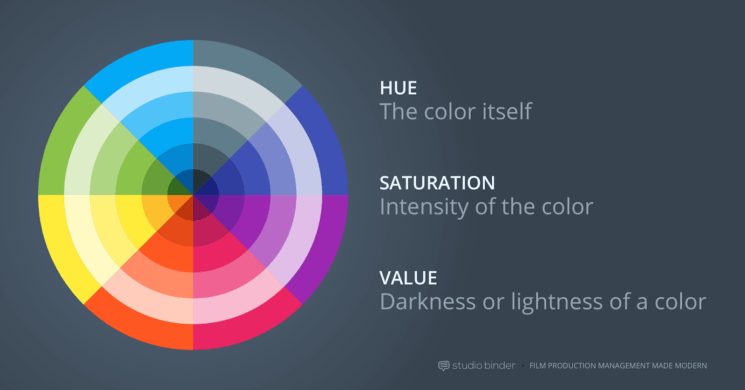 As Bond mentions in his color theory video, many viewers will have predictably similar reactions to certain colors. A strong red color has been shown to raise blood pressure, while a blue color elicits a calming effect.

A beautiful video by Lilly Mtz-Seara illustrates the psychology behind specific colors in film:

When chosen carefully, a well-placed movie color palette evokes mood and sets the tone for the film.

For example, in The Sixth Sense, M. Night Shyamalan uses the color red to represent fear, dread and foreshadowing whereas in Pleasantville, Gary Ross uses red to represent hope, love and sensuality. Color theory norms should be understood by filmmakers, but never seen as a limitation.

Although single, recurring colors can hold a deeper meaning, a more fleshed out film palette of colors (aka “color scheme”) is most effective in communicating the thematic context. Balanced movie color schemes refer to the harmonious relationships of colors on a color wheel.

A balanced movie color palette creates unity and promotes a cohesive tone. The four most common types of color schemes are described below. 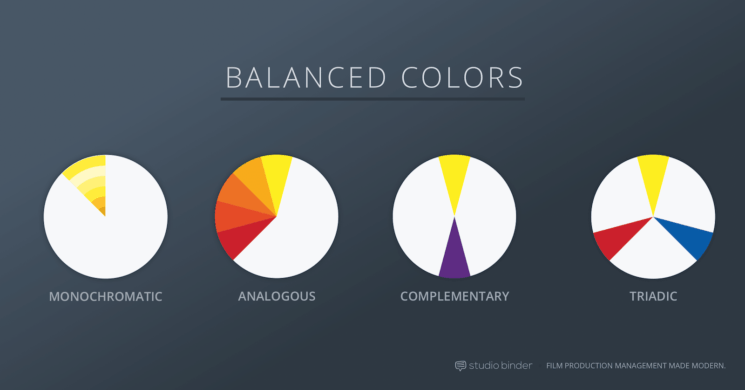 Monochromatic color schemes come in shades of a single color such as red, dark red, and pink. They create a deeply harmonious feeling that is soft, lulling and soothing.

The Matrix is a good example of a monochromatic movie color scheme. Nearly every scene set within the world of the matrix has a green hue. Shades of green permeate everything in the frame to create an unnatural, “lulling” effect (representative of those “asleep” inside the Matrix).

Monochromatic colors in film create a soft, lulling effect like in The Matrix or The Grand Budapest Hotel.

Orange and blue are complementary colors used in many blockbusters. The dueling colors represent conflict.

Analogous colors neighbor each other on the color wheel (i.e. red / violet or yellow / lime green). Since the colors don’t have the contrast and tension of the complementary colors, they create an overall harmonious and soothing viewing experience. Analogous colors are easy to take advantage of in landscapes and exteriors as they are often found in nature.

One color can be chosen to dominate, a second to support, and a third (along with blacks, whites and grey tones) to accent.

Vibrant and colorful, Triadic colors are three colors arranged evenly spaced around the color wheel (i.e. red, blue and yellow). One color should be dominant and the others accented. Triadic is one of the least common movie color schemes, but it can be striking and vibrant even when the hues are unsaturated.

Discordance is a deliberate choice by the director to deviate from the balanced movie color schemes mentioned above to refocus attention.

Discording colors can help a character, detail, or moment stand out from the rest of the film. For example, the color blue in Amelie, or the color red in the Sixth Sense.

Enhancing the symbolism in your film color palette

When a recurring film palette or color represents a character or larger theme in the film.

While many movie color schemes can exhibit a “universal” effect on audiences, there’s really no magic bullet or “right” answer when it comes to selecting your movie color palette. Ultimately it’s up to the filmmaker to define the implications of the film palette. With that said, looking to universal color theory is an all important first step.

To view more examples of color in films, check out Movies in Color. For another deep look on the big impact of small visual choices, check out our essay 6 Ways To Turn Props Into Iconic Characters.

StudioBinder is the world’s leading video, TV & film production management software with packages starting at Free. With features such as Call Sheet Builder, shoot schedules, script breakdowns and crew management, it’s the complete solution for organising your production. Check out the StudioBinder website for more details. This article was also published here and used with permission.

Colour in Cinema: Ad Astra – The Most Colourful Movie You Never Saw
« Photographers rock! These are 10 great musicians who are also great photographers
Is Phase One feeling threatened by mirrorless medium format cameras? Capture One “Unlikely” to support Fuji GFX »