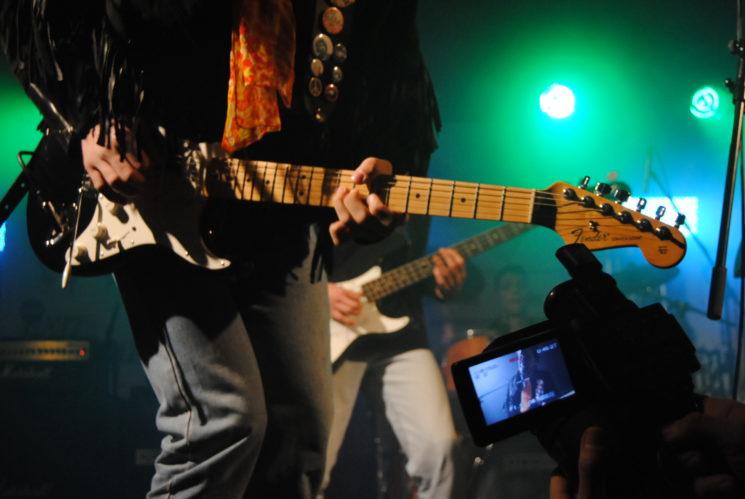 Apart from being in love with photography, I am also completely enchanted by music. My photos are often inspired by music or song lyrics, and I love the way these two forms of art intertwine. Unfortunately, I can’t play any instrument, although I’ve tried. And I’m a terrible singer.

Apart from being a guitar player of the band The Police, Andy is also famous for his photographic work. In the past 30 years, he’s had 35 photography exhibitions all over the world. His photography is inspired by his music, and it’s often a bit moody. Just as I love The Police, I have to say I love Andy’s photos, too.

Bill Wyman is a former bass player of one of the greatest rock n roll bands of all time – The Rolling Stones. And as if a lustrous career as a musician weren’t enough, Bill is also very successful as an inventor and photographer. He’s taken photos throughout his carrier and had them displayed all over the world. He also sells prints, and if you want to learn more about his work, visit an exhibition or buy a print, you can find all information here.

Famous Canadian singer-songwriter is not limited only to talent for music. He’s also a respected photographer who had his work featured in various magazines, created marketing campaigns and had his photos exhibited all over the world. Along with other photographers from the Commonwealth, In 2002 Adams was invited to photograph Queen Elizabeth II during her Golden Jubilee. You can see his photographic work here.

If you don’t know him simply by name (which I doubt), you may know David Byrne as singer and guitarist of Talking Heads. He’s a man of distinctive voice and unique style. Apart from being a successful and prolific musician, he is talented and successful in many other fields as well. As you can imagine, photography is among them. David had his photos displayed in many galleries in different parts of the world, and you can see some of them here.

If you listen to classic rock music from the ’60s and ’70s, you’ve probably heard of Crosby, Stills, Nash (& Young). Graham Nash is singer and guitarist of this folk rock supergroup. In addition to wonderful voice and guitar playing skills, he is also very keen on photography. You can learn more about his work by visiting his website.

I doubt there’s anyone who hasn’t heard of John Lennon. Julian Lennon is his older son, who obviously got the talents from his father. He is a musician of beautiful voice, who has issued six studio albums since 1984. But music is not his only passion. He’s also very devoted to photography, and very talented if I may say. You can see more of his work here.

A singer of Velvet Underground and a brilliant solo artist, Lour Reed, left us in 2013. But he left a legacy in his music, photos and photography books. He was also a filmmaker, and below you can see a documentary about his cousin who turned 100. You can see his photographic work here, or purchase his book and enjoy it while listening to any of his albums.

If you’re not sure who Michael Stipe is, does “Losing My Religion” ring a bell? Michael is a singer of alternative rock group R.E.M. And when he’s not losing his religion and making music, he is taking photos and making collages. You can see more of his work here.

Mick Fleetfood is a drummer and co-founder of the rock band Fleetwood Mac. In addition to being a drummer, he is also an actor, and a very keen photographer. You can see his photographic and other work on his website.

I don’t know in which genre I would place Moby’s music. It’s mainly electronic, but he does incorporate some alternative rock elements into it. But one thing’s for sure – you can’t easily mix his music up with someone else’s. Just like he has a distinctive style in music, it’s the same in photography. Moby is a rather good photographer, and I find his work very interesting and even a bit disturbing at times. Just like his music. You can see more of his photos here.

What do you think of this list? Do you prefer their music or their photos? Is there anyone I missed? I’d love to hear your thoughts in the comments.

9 behaviors of great photographers that you should embrace