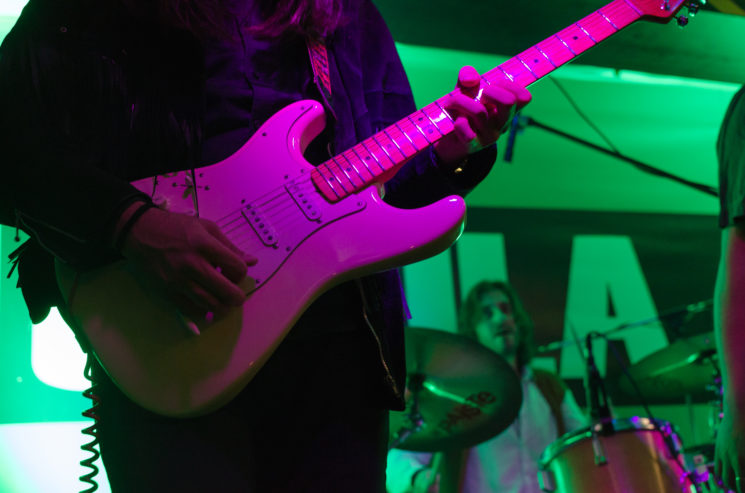 I love it when photos and music intertwine and inspire each other. Both music and photography are important parts of my life, even though I only listen to music, I don’t make it as I do with photos. So, I am amazed by talented people who can do both things equally well.

A while ago, I created a list of ten actors/actresses who are also photographers and ten musicians who also rock at photography. Now I bring you nine more of them who appear to be as passionate about taking photos as they are about music.

Patti Smith is an American singer-songwriter, musician, author, and poet. And as I recently discovered, she’s also an avid photographer.

In 1967, she met photographer Robert Mapplethorpe who became an important figure in her life. They were in a relationship for a while, but later remained friends until his death in 1989. Robert took photos of Patti that became the covers for the Patti Smith Group albums. It’s just my guess, but perhaps he was one of the people who inspired her photography, considering that they created art together.

Patti Smith married Fred “Sonic” Smith in 1980 and they had two children. Sadly, Fred passed away in 1994. After his death, she started developing “pure photography,” a method of capturing still objects without a flash. She has had numerous exhibitions of her work and contributed with a special introduction to Jessica Lange’s 2009 book 50 Photographs.

A post shared by This is Patti Smith (@thisispattismith)

I believe you all know about Lenny Kravitz the musician, but many of you might even know about him as a photographer. He is a fan of Leica and even teamed up with the company twice for limited edition cameras. In 2015, Lenny Kravitz collaborated with Leica on creating an M-P edition titled “The Correspondent.” Last year, Leica launched another limited edition camera, the pricey Monochrom “Drifter.” As a part of the last year’s collaboration, a gallery of Lenny’s work was on display from 24 May until 25 August in the Leica Gallery in Wetzlar Germany.

In March this year, country music legend Kenny Rogers passed away. Sadly, it was only then that I learned that he was a fantastic photographer in addition to being a talented musician.

Kenny Rogers started taking photos in the 1980s, and it became his obsession. His work mainly consists of portraits and landscapes, often black and white, but there are also some beautiful color images that he took. The musician even published three photography books: Kenny Rogers’ America (1986), Your Friends and Mine (1987), and This Is My Country (2005).

You can see some of Kenny Rogers’ photos on Instagram, and read more about his photographic work here.

For me personally, Keziah Jones is one of those who instantly became my favorite the moment I heard his music. But other than being a super-talented guitar player of a fantastic voice, he is great at other forms of art as well. He writes poetry and plays, draws, paints and yes – takes photos, too.

I couldn’t find much of his non-musical work online, even on his Instagram account. He has produced some short films, including BLACKSPEEDTEXT, for which he also wrote music and starred.

Nikki Sixx is probably best known as the bassist and primary songwriter of Mötley Crüe. Along with the drummer Tommy Lee, he formed the band in 1981. During his Mötley Crüe days, Nikki Sixx got addicted to heroin. After a long battle with addiction, he managed to get out of its claws and recover. In his book This Is Gonna Hurt: Music, Photography and Life Through the Distorted Lens of Nikki Sixx, he talks about his life, but also his art. The book is a mixture of diary and photographs that he took.

“I am a recovering addict. Cameras are my new drug,” Nikki Sixx writes in his Instagram bio. I would describe his style as somewhat dark, even slightly disturbing at times, but I like it very much.

Tony Levin is a bass player (and a darn amazing one, if I may add). He is probably best known for his performance with King Krimson and Peter Gabriel, but he has played with many more musicians.

Levin has released two photography books. Road Photos (1984) is a collection of black and white images he took during his travels with King Crimson, Peter Gabriel and other performers. The Crimson Chronicles volume 1 contains photos from King Crimson’s travels in the 1980s, and it was released in 2004. You can follow Tony Levin on Instagram.

Bill Wyman is another bass player on our list. He was a member of The Rolling Stones from 1962 until 1993. Four years after leaving The Stones, he began touring with his own band, Bill Wyman’s Rhythm Kings.

Just like other musicians on this list, Wyman is also a keen photographer. He has been into photography in parallel with his music career, and his images have been displayed in galleries around the world. In June 2010, he launched a retrospective of his work in an exhibition in St Paul de Vence, France. If you’d like to see Bill Wyman’s work, you can find it on his official website.

Slipknot is one of those bands I listened to in high school. However, only recently have I found out that their percussionist, M. Shawn Crahan, is an avid photographer. In 2012, Crahan a.k.a. Clown published a Slipknot photo book The Apocalyptic Nightmare Journey. You can also follow him on Instagram and find out more about his work on his official website.

The last, but definitely not the least on our list is Alexander Otto. He is a singer of a pretty awesome metal band Words of Farewell, but he is also a professional photographer. His band’s music is fierce and his voice is powerful – but his landscape images are peaceful, soothing, and filled with colors. I personally like them a lot, just as I like Words of Farewell’s music.  You can follow Alexander’s photographic work on Instagram.

In this list, just like in the previous one, I included the musicians whose music I know at least to some extent. Not to mention that some of them are among my favorites. I’m sure there are many more great musicians who also rock at photography, and if you have anyone to add to my list – shoot! :)

These are the nine worst habits for landscape photographers