Today, as is the case most days, I check out my phone to see that I have an app update.  Given the number of iOS apps I’ve used over the years that have suddenly become useless, unstable, or removed significant features with newer versions, I’ve disabled automatic app updates.

Upon seeing that an update was available for the YouTube app, what a joy it was to see that they’ve finally added Google Cardboard support for both 360 degree videos using the phone’s built in accelerometers, as well as 3D video! 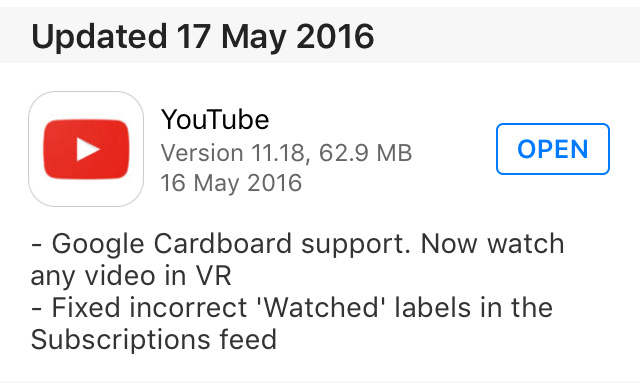 So, iPhone owners no longer need to also have an Android device, who have enjoyed this support for over a year now, in order to watch 3D or 360 degree videos.

If you’ve been itching to give it a try, there’s plenty of 360 degree and 3D content over on YouTube for you to play with.

And there’s a whole lot more over on the 360° Videos channel on YouTube.

With the iPhone SE, the actual 3D experience seems a little underwhelming, perhaps due to the fact that it’s such a small screen relative to the iPhone 6S and 6S Plus.

The left and right viewpoints seem quite a way off, and actually adjusting your eyes to get them to line up definitely started to give me a headache pretty quickly, but at least it’s a start.

Let us know how you get along with it, and with which iPhone, in the comments.

Apple is finally giving us RAW photo support in iOS 10

This is the first ever 360-degree video of a spacewalk