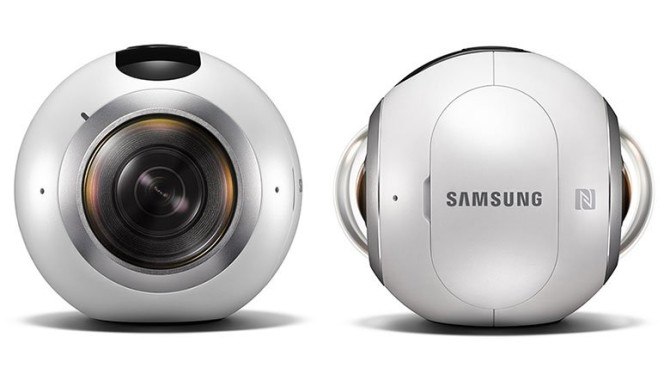 Looking more like a giant eyeball than a camera, Samsung have today entered into the 360 degree arena with the announcement of the Samsung Gear 360 camera.

Two lenses seems to be becoming the standard when it comes to 360 degree cameras, as opposed to bolting half a dozen cameras on a rig, and we’ve seen this already in cameras like the Ricoh Theta S.

This camera also conforms to that new standard with a pair of f/2.0 lenses, each covering an extremely wide 195 degree field of view for full 360 degree total coverage.

The mostly featureless exterior hides a microSD card slot supporting cards up to 128GB, and a swappable battery via a small door.  The top of the unit sports a small monochrome PMOLED display with power, record and other buttons darted about the top & side.

Seemingly aimed more at the consumer VR market than the adrenaline junkie action cam market, the Gear 360 is described as being “splash-proof” and dust resistant.

I wouldn’t expect it to take the same kind of punishment that some of us have come to expect from the likes of GoPro, or the hotly anticipated Nikon Keymission 360, but it still offers a lot for those whose 360 degree requirements are a little more relaxed. 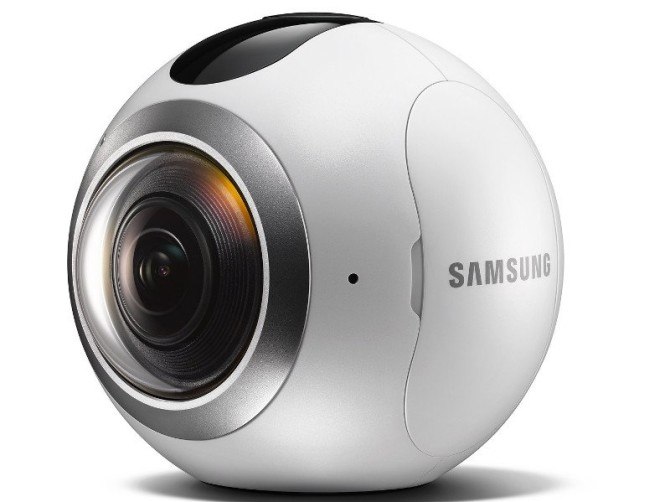 As with most 360 degree cameras and rigs, you’ll need to pull the files off the Gear 360 and use another application to perform the stitching.  As of this moment, the new Samsung Galaxy S7 and S7 Edge are the only two phones that can do this with the Gear 360, but Samsung have stated that the camera will be compatible with “select Samsung smartphones”.

They haven’t yet said which smartphones those will be, or whether the Gear 360 will ever work with phones other than Samsung’s own, but you will be able to download a PC-only application to handle the stitching (Sorry, Mac users!).

The folks over at The Verge had a bit of a hands on with the Gear 360 at MWC2016 in Barcelona.  Here’s what they had to say.

With video resolution a tad smaller than 4K, at 3840×1920, and spherical photos weighing in at 30MP, it’s not going to be competing with any professional rigs, but with 360 degree video slowly creeping more and more onto sites like YouTube and Facebook, this could be a good way to start your 360 degree journey.

We know that this is going to be big because Mark Zuckerberg is giving them some back.

No news yet on an exact release date, nor price, nor a complete list of compatible devices, but they hope to release sometime in 2016 Q2, with the other details coming forth around the same time.