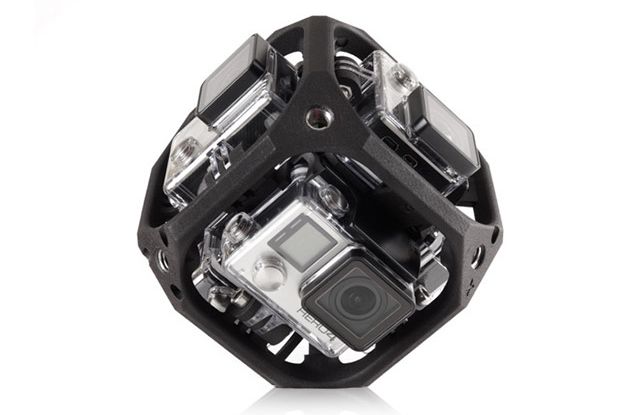 In addition to its upcoming drone, GoPro has announced it is working on a dedicated spherical mount that will hold six of its Hero cameras and allow recording footage for virtual reality and augmented reality systems.

GoPro is also looking to simplify the working process and is developing software that will automatically sync videos from the camera to the cloud.

“When Facebook dropped the gauntlet and acquired Oculus, it sent a message that, ok there’s going to be heavy development and investment in virtual reality,” Woodman explained the company’s decision to invest in the VR and augmented reality market.

GoPro’s announcement last month that it will be purchasing Kolor, a leading immersive video software company, was just the first step in series of moves intended to set GoPro as a dominant player in the VR/AR market.

The next couple of steps that have now been announced, a spherical mount and 360° stitching software, will help GoPro secure its position in this upcoming field as it did in the action cameras’ market.

When GoPro purchased Kolor, we mentioned that many professionals feared the company would no longer cater to their high-end needs and would instead be focusing on GoPro’s ‘normal’ clients.

Woodman, however, said they’d be enabling “professionals and prosumers” to create VR content, and looks like GoPro putting their money where their CEO’s mouth is as the array “is really going to be most appealing for production companies and prosumers”.

The CEO added that while ‘normal’ users will also buy it, the first version of the array will be designed for the pros.

Hoping to make their VR/AR system as popular as possible, GoPro plans for its video to be compatible with the most popular systems out there, including Oculus (Facebook), Hololens (Microsoft), Google Cardboard and YouTube’s 360° videos.

As for the software, Woodman says it is still in ‘alpha’ and although it’s still in its early stages, the software should eventually allow users to view and edit their immersive video without “having to touch an SD card or touch a USB cord”.

Another sign that augmented reality and virtual reality should be the next big thing was given as Apple announced it is purchasing an AR software company on Friday.

Apple joined tech giants such as Google, Facebook and Microsoft who are all heavily invested in immersive media technology.

Tips For Syncing A Lightroom Editing Laptop With A Work Station

« Nikon Wants Your Money, Offers Up To $900 Instant Savings
Was Sony’s Site Hacked? Listed DSLR Cameras and Lenses Up To 90% Off »