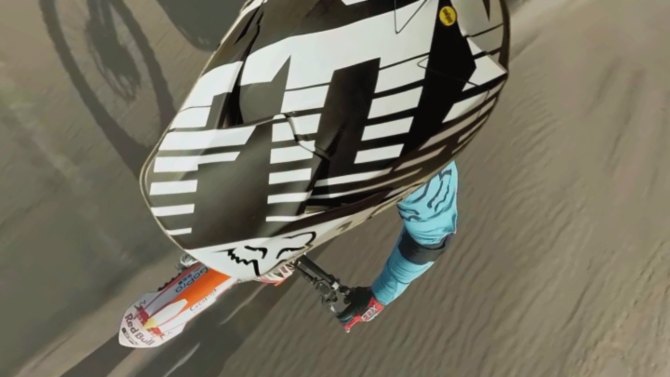 We’ve been reporting on GoPro’s advance into the virtual reality market in the past. First with their acquisition of Kolor, the 360 content editing software and then again when the popular action camera manufacturer announced they were working on a drone and a a 6 six camera spherical mount which was geared towards the VR/AR crowd.

It certainly looks like they’re making some exciting progress. Today, GoPro released of a pretty sweet 360 panoramic video featuring champion FMX rider, Ronnie Renner dune jumping in Idaho, to show off what they’re capable off thanks to those aforementioned announcements.

“In the coming weeks, GoPro will launch additional 360-degree content on Facebook where users can expect a variety of never-before-seen, immersive experiences from the vantage point of GoPro world-class athletes, top chefs and more…Viewers will not need a headset to access the new GoPro videos on News Feed. The immersive content will run natively on Facebook on web and Android, where viewers can choose what angle they want to see it from.”

As the caption explains, you can click and drag on the video to change the camera view at any point while the video is rolling without interrupting playback. Being able to interact with the video to that level is pretty awesome and reminiscent of what I imagine wearing a virtual reality headset might be like. Very cool!

Check out freeride legend Ronnie Renner FMX carving up the dunes in Idaho with full 360 view. For the most immersive experience, click and drag the camera.

You can interact with more 360 video on YouTube’s 360 project (even without a VR headset), but this drone driven GoPro experience is pretty hard to top–I can’t wait to see what else they have in store!

« Fujin Mark II Vacuum “Lens” Sucks The Dirt, Dust, & Grime Right Out Of Your SLR
5 Tips To Use Dropbox for Small Business »