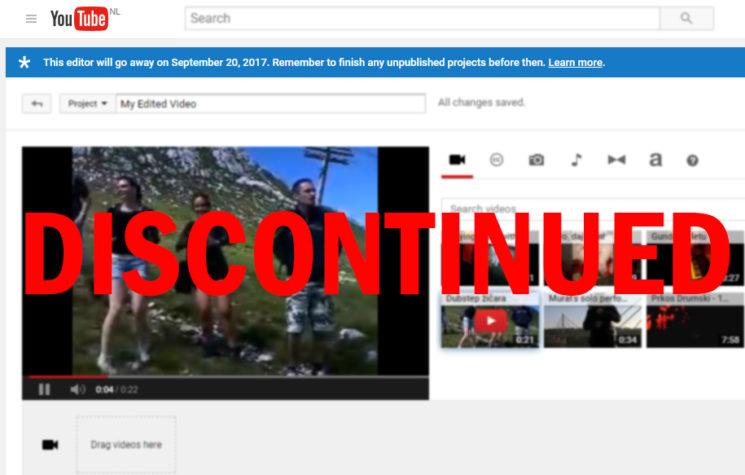 A recent post on Google products forum announces that YouTube Video Editor and Photo slideshows will be discontinued in September. Apparently, there were a limited number of users of these features. So, Google has decided to cancel them completely so they can focus on “building new tools and improving on other existing features.”

When it comes to the features that will be canceled, the first one is raw video clip editing, and the second one is the Photo slideshow tool. However, the good news is that the developers will leave the Enhancements features available at least. So, you can go on editing certain features of your videos such as trimming, blurring, adding some quick fixes and so on. According to the post, this is what you will still be able to use when it comes to enhancements:

From this point on, you’ll have nearly two months to complete any unfinished projects you have in your account. The features will be canceled on September 20, 2017. After this, you will not have the access to the features of Video Editor anymore. Of course, if you have finished and published videos, none of them will be affected by the change. You can also download your videos in 720p or use Google Takeout to retrieve the original files.

According to the replies on the forum, Chromebook users are very displeased with the decision. It was the only way to edit videos for them, and it seems unfair to discontinue the tool without offering an alternative. I can imagine the inconvenience for those who got used to this tool, and especially those using the Chromebook.

I haven’t  used the tool that often, considering I am mainly concentrated on photography. Still, I can imagine the inconvenience for those who got used to this tool, and especially those using the Chromebook. It really is unfair to leave them without the only tool for editing videos. So, I do hope that “building new tools and improving on other existing features” will offer them a new solution for video editing.

« Four Years With Stocksy United: A Photographer’s Review
Here is how to overcome wind when light painting »