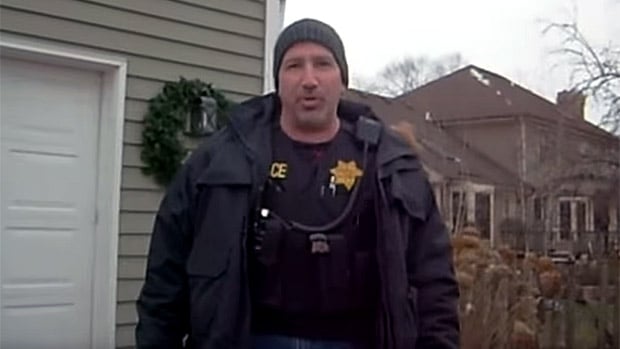 An Illinois woman, who was arrested and charges were filed against her after she recorded police officers on her friend’s property without their consent, decided to fight back and stand up for her rights.

Ironically enough the officers themselves were not given permission to enter the property in the first place. Additionally, the Illinois Eavesdropping Act under which the woman was arrested had already been ruled unconstitutional.

PINAC reports that after filing a lawsuit against the city of Naperville, a suburb of Chicago, and the police officers involved, the woman accepted a $117,500 settlement.

In the settlement agreement the city insists that the agreement is not an admission that the police “acted wrongfully”, but the videos below paint a different picture.

Back in January 23, 2013, Malia “Kim” Bendis recorded utility workers as they ignored a locked gate and entered her friend’s property to install a smart meter.

The friend and homeowner, Jennifer Stahl, was part of a group of residents that had opposed the wireless devices due to health concerns, as was Bendis herself, and for that reason four policemen had joined the workers.

After what seems like a few minutes that Bendis was recording the events and getting Stahl’s disapproval on camera, Sergeant Nick Liberio told her that she does not have his consent to record him and asked her to desist. Several moments later he arrested her for recording him, even though, get this, a CBS news crew was also there recording the women, the cops, the utility workers and eventually the arrest as well. Needless to say the news crew was not arrested.

PINAC mentions that other than the fact that the Illinois Eavesdropping Act had already been ruled unconstitutional by then, there have been several arrests made over the years and not a single conviction.

PINAC points out that the fact that Bendis was charges with misdemeanor eavesdropping, while all previous arrests were felonies, indicates police knew they had a weak case. In fact, looking at the lawsuit Bendis filed, it seems PINAC was not the only one to think these charges don’t hold water.

Apparently filing felony eavesdropping charges require the approval of an Assistant State’s Attorney and the lawsuit claims the defendants could not get it, thus leading to misdemeanor charges.

The suit adds that knowing the Class A misdemeanor charge of attempted eavesdropping would not be held up in court, and because the city wanted to prosecute Bendis, the officers fabricated the charge of resisting a peace officer.

As expected, during the criminal case the DuPage County State’s Attorney dismissed the misdemeanor charge of attempted eavesdropping due to the statute being unconstitutional. Additionally, a jury acquitted Bendis, finding her not guilty on the charge of resisting a peace officer.

With all that in mind, and the fact that Bendis had to appear in court several times during the twenty plus months the criminal case against her was pending, the defendants were probably more than happy to pay her (and her lawyers) the lump sum.

For those interested, here are the lawsuit and the settlement agreement.

« Study finds the average photojournalist is male, self-employed, earns little but happy
NASA Photographs Supersonic Schockwaves From Earth; Says You Can Too With Only $3000 Of Consumer Level Gear »