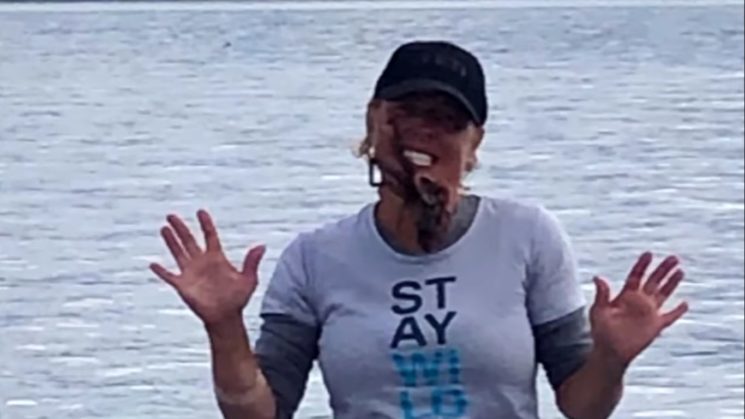 A woman from Tacoma, Washington recently ended up in hospital after posing with a live octopus on her face. Reportedly, she thought that the photo will help her win a local photo competition. But instead, the venomous animal bit her on the face and sent her to the emergency room.

Jamie Bisceglia was at the fishing derby in the Tacoma Narrows when she met up with fishermen who had hooked an octopus. She put the animal on her face and started posing for a photo, hoping that it would win her a prize at the derby photo contest. But the octopus apparently wasn’t into posing. She first grabbed Bisceglia with its suckers and then bit her on the face twice. Bisceglia says that she felt intense pain and that there was a lot of blood. However, as Kiro7 reports, she kept fishing for two more days before she went to the emergency room.

After visiting the hospital, Bisceglia was given three different antibiotics. She is still in pain, as she says. And possibly the worst thing is that the swelling can come and go for months, as doctors told her.

A spokeswoman at the Point Defiance Aquarium believes that it was a Pacific red octopus that bit Bisceglia. On the other hand, Bisceglia says that it was a “smaller juvenile version” of a giant Pacific octopus. Whichever it was, both have a powerful beak and they inject venom which is supposed to immobilize their prey.

We’ve seen people do all kinds of weird stuff for a photo. This story reminded me of that dude who put his head into a pelican’s beak to take a selfie. In my opinion, both he and Bisceglia fall under “Why, tho?” category. I try hard, but can’t find an even remotely logical reason why you’d do any of this.

Anyway, Bisceglia says that she’s learned a valuable lesson and that she’ll never do this again. I guess that learning things the hard way is sometimes the best (or the only) way to learn.