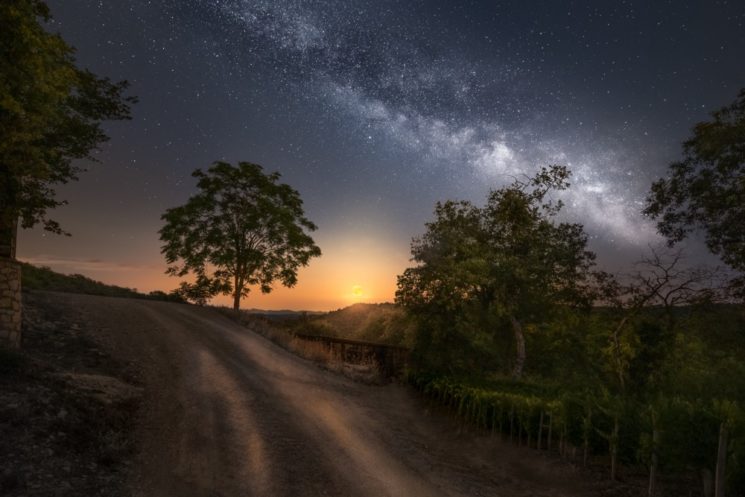 Arlington, Texas, was long in the lead when it came to being this summer’s family vacation destination. However, sometime in May we arrived at that we wanted to revisit Italy. Last time we didn’t make it to Tuscany, so there was no doubt that this would be the area to stay and explore. Some friends had recommended agroturismos, that is, wine farms. Initially I had my strong doubts about staying at a farm of some sort, but when it struck me that it was milky way season in Italy in July my misgivings somehow vanished.

After all it was a family vacation where photography would be second priority, so I wasn’t thoroughly convinced that I would get my shots. And besides I had no idea whether light pollution would put an effective stop to my milky way hopes.

Anyhow, I optimistically packed my in-plane suitcase with what I considered an absolute minimum of photography gear. 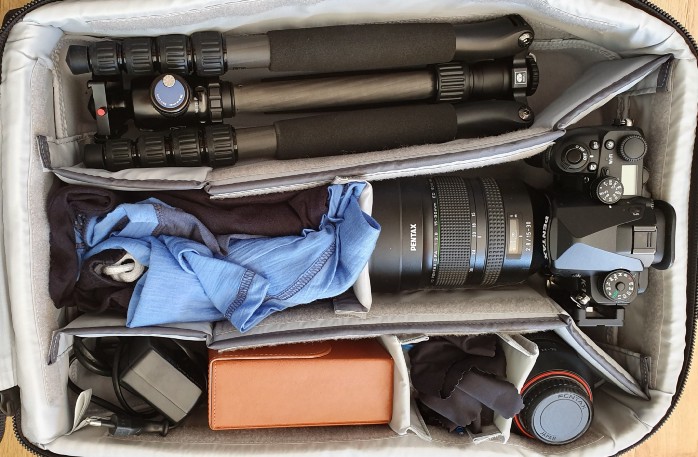 Agroturismo Collelungo just outside Castellina in Chianti proved to be a small heaven both for the family and the milky way. I was pleasantly surprised by the rather modest light pollution around the wine farm. Due to the nature of our trip driving long distances to escape light pollution was not an option. 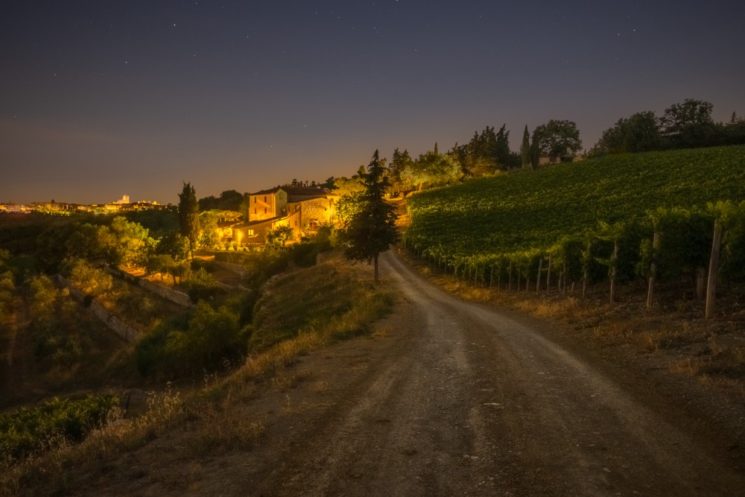 Collelungo with Castellina in Chianti in the background

The image is without any milky way owing to the simple fact that the MW is behind my back. This is a blend of four exposures for controlling the light and yet have some shadow detail to play with. Nothing fancy when it comes to the blend. I let the HDR option in Lightroom carry out the blending for me.

Lightroom did, though, mess up my sky probably because I didn’t shoot auto-bracketed but did so manually checking the histogram after each shot. I have thus blended in the sky exposure among the four which seemed best suited for the task.

I have to admit that I am not an avid user of various apps to find out this or that so when an almost full moon began rising the first evening I was out with the camera I was not little surprised, and also annoyed knowing that it would wash out any milky way. Before I wrapped up I shot a few exposures of the moon swearing to myself that I would check out the moon phases when I was back in our modest but cozy apartment.

An almost full moon rising in Collelungo. Also on 500px

This is a blend of three exposures; the foreground, an exposure for the milky way shot before the moon ruined everything and an exposure for the moon. After some trial and error I was able to find some settings that didn’t blow out the moon. The moon is f11, iso 400 and 1 sec. The moon is btw 30mm whereas the rest is 15mm and 20 secs, f2.8, iso 3200.

Back in the apartment checking the moon phases on my cell I to my great joy found that the moon would rise later the next evening and even later the evening after that. It was panorama time.

The image can be viewed large and on black on Flickr

Our son joined me this particular evening and was of great help. He among other things kept his cell phone’s flash light steady on the level located at the base of my travel tripod while I adjusted the legs until the tripod was in level. Eight 15mm verticals ensued. Each iso 6400, f2.8, 20 secs. Again I trusted Lightroom with the blending assignment, but in this case a panorama.

The next evening I was out on my own something which meant I now was involved in a balancing act between trying to hold my cell phone’s flash light, keeping an eye on the level and adjusting the tripod legs. It is not unlikely I looked a tad ridiculous. I opted to not bring a headlamp to Italy.

I haven’t had the time to edit all my night images from our stay in Chianti, but this vertical has been through the ordeal of having me editing it. 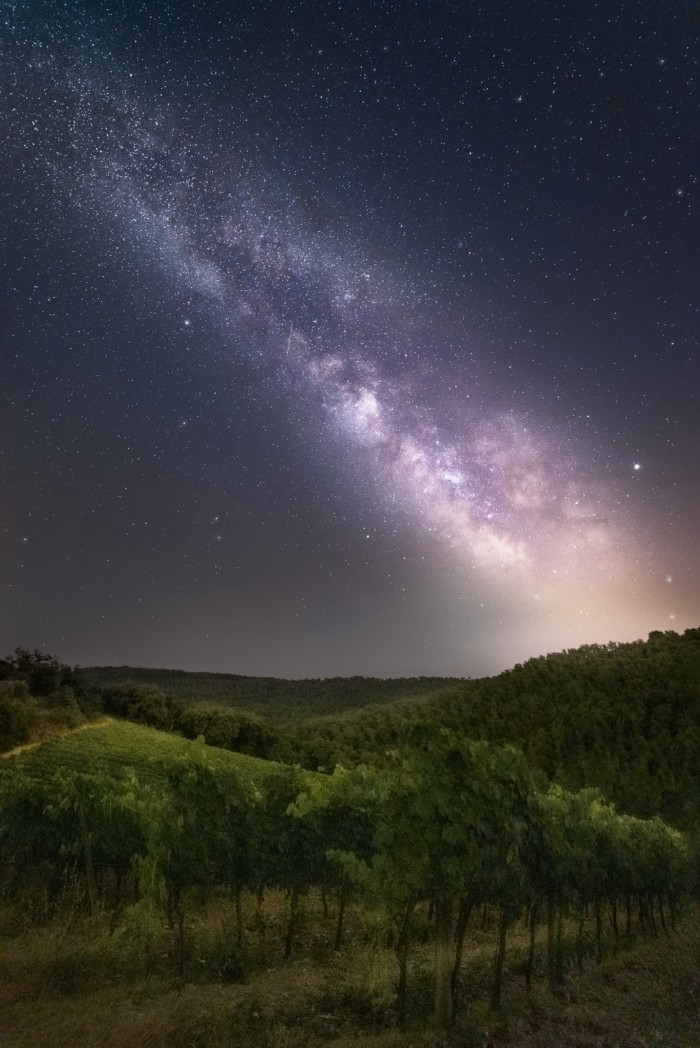 From our last trip to Italy three years ago I had learned that sunsets don’t quite match what we get in the southern parts of Norway during summer. Nevertheless, I was able to record one relatively decent sunset in Chianti.

After four nights in Chianti we headed to Lucca where we spent five nights. Lucca was, however, a different story when it comes to light pollution. I was very grateful it had been possible to spend three evenings out in Chianti getting my much desired milky way shots.

When that is mentioned we actually had one stunning sunset in Lucca. All four of us headed out to a castle not far from where we stayed. I had wished for a different foreground, but sometimes we have to use what we get. 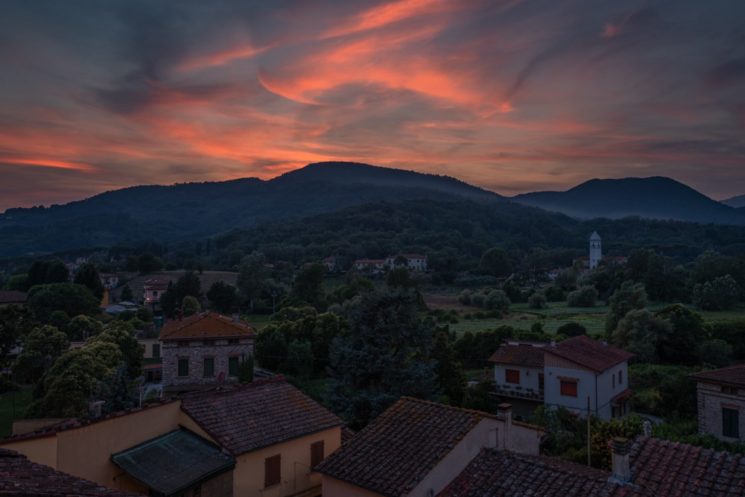 Notably my wife and I fell completely in love with Chianti and hope to return one day in a not a too distant future. There is something uniquely special about Italy. Not only do they offer a decent milky way, but tasteful food, beautiful scenery, passion and a lovely people save when they place themselves behind the wheel of a car.

These Beautiful Broken Mirror Sunsets Are Anything But Bad Luck

This optimistic message took over 50 sunsets to shoot