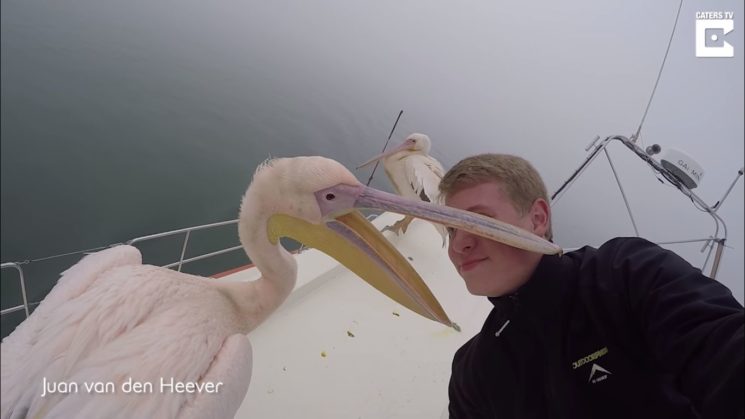 People do all sorts of stupid things when they are taking selfies with animals, we’ve seen it before. Young photographer Juan van den Heever wanted to take a photo with a biting pelican. It wasn’t enough that the bird was biting his camera and selfie stick, but he eventually stuck his head into the pelican’s beak, of course, to take a selfie.

As the description of the video reads, Juan van den Heever is an 18-year-old a student from Pretoria, Gauteng, South Africa. He shot this video while he was with his family on a boat cruise in the Walvis Bay Lagoon, Namibia in July.

The pelican doesn’t look so happy with the camera and the selfie stick that keep moving all around him, so he’s biting on them. But for some reason, the photographer then puts his head in the bird’s beak. And it looks like the pelican likes biting him, since it did it a couple of times. To be fair, I’d probably bite someone too if they kept pushing a camera and a selfie stick into my face.

As I said, we’ve seen people do all sorts of stupid things in order to take selfies with animals. Some of them ended fatally, both for the animals and for the humans. The reason for putting your head inside a pelican’s beak remains totally unknown to me… But hey, at least this time no one got hurt.

Polaroid Camera Made From Popsicle Sticks