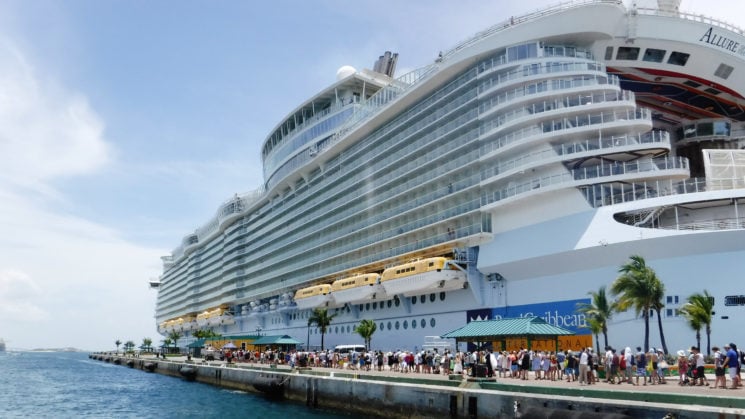 With the number of selfie deaths on the increase with new ones happening almost every week, you’d think people would get smart and figure out that taking dangerous risks for social media just isn’t worth it. Apparently not. A woman has been reportedly been banned for life by Royal Caribbean Cruises after posing for a selfie on the wrong side of the balcony safety rails outside her room.

CNN reports that the incident happened aboard the Allure of the Seas ship as it was approaching Labadee, Haiti earlier in the week. An unnamed woman was spotted by another passenger, Peter Blosic, while out on his own balcony, who then alerted the crew.

Blosic posted a photo of what he saw, a lady with her hands above her head, appearing to pose for a camera behind her, branding her a “moron” and an “absolute IDIOT”. He said in his post that he alerted guest services soon after he saw her. After showing the photo to the staff captain, they were able to determine the room in which the guest was staying, reports The Sun.

Security was notified and the guests were later debarked in Falmouth, Jamaica, as a result of their actions and are now banned for life from sailing with Royal Caribbean.

Passengers are forbidden from “sitting, standing, laying or climbing on, over or across any exterior or interior railings or other protective barriers” according to Royal Caribbean’s guest conduct policy.

With the number of people who fall off ships throughout the year, never to be found, she’s lucky she got off with just being banned.

« ON1 announces ON1 Photo RAW 2020 with AI-powered features and other improvements
These photos were taken by two little girls in 1917, and they are gorgeous »