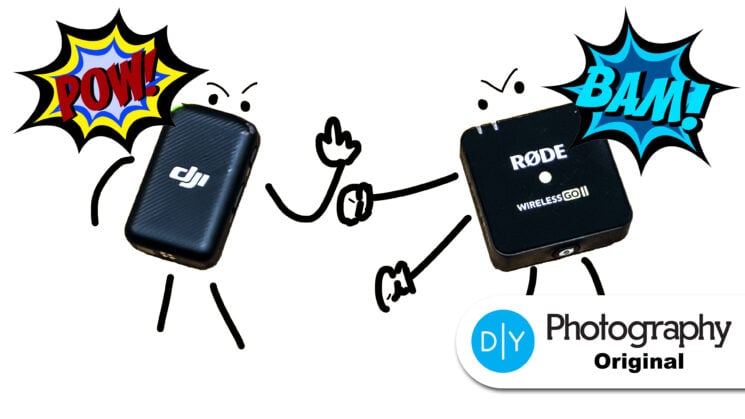 The wireless microphone space is growing. Content creators, particularly mobile content creators, are looking for great sound solutions. In this article, I want to talk about what happened when I put the DJI Mic and the Røde Wireless Go 2 head-to-head. I did this in partnership with Kersten Luts of the Camera Shake podcast for some real-world results.

Whilst this fight is between DJI and Røde, it’s worth noting that there are plenty of other options available. Joby offers the Wavo AIR, Godox offers the MoveLink (reviewed here), and Sennheiser offers the XSW-D, as just a few examples. They all fall around a similar price point, and all offer great sound in a small package. Let’s get straight into the battle!

This is where we’ll start for these wireless microphones. Both the DJI and Røde mics transmit at 2.4GHz frequency band. This band has good performance from both units at close range. Even if there is a minor obstacle between the transmitter and receiver units. It also gives stable connectivity in environments rich with other RF interference. From my experience, though, 2.4GHz does have some limitations in more saturated environments.

The distance differs, with DJI offering us a 250m range compared to Røde’s 200m. DJI has the lead here. If we look deeper into what DJI does, they’re essentially a company that’s good at transmission. Almost all they do involves having to transmit perfect signals (Ronin 4D, anyone?), so it’s no surprise that they’re able to get a little more out of their tech in this instance.

We all benefit from smaller size and weight, but mobile content creators are even more so. The DJI and Røde microphones come in at 30g (~1 oz), but the DJI mic appears smaller due to its shape. The DJI is rectangular, whereas the Røde is square. It’s pretty much a draw on this front, but in my opinion, DJI has a slight advantage.

I also think DJI takes the edge here. The Røde mic is made of shiny material and has white lettering and symbols on each side, but the DJI has a matt finish and discreet lettering. I like the more covert look. Both have indicator lights that stand out. In terms of the overall package, DJI also has better aesthetics. The DJI mic has a combined charging and carrying case that holds the microphones, receiver, and adaptors. The Røde has small neoprene pouches. The ability to store and charge the DJI mics together in a nicely finished case is a nice feature.

Both mics have a 3.5mm jack for using a lav, but only Røde produce their own lav mic. This converts the microphone unit into a transmitter, bypassing the built-in mic in favor of a more discreet microphone. Røde also has a cool accessory that converts the Wireless Go 2 into a hand mic – the Interview Go. On this point, Rode takes the lead.

Honestly, there’s very little difference. In most cases, the difference in sound comes down to the user. For instance, the inverse square law that we apply to light works similarly in sound. If the microphone is positioned incorrectly, we’ll find the results differ. Both the DJI Mic and the Røde Wireless Go 2 have great sound quality for what they are.

This changes when you use a pro lavalier. Then the quality of the mic will determine your sound quality, but this is a more advanced use. If we’re hyper-critical, we’ll obviously find that neither of these mics stack up against professional gear, but they’re great for what they are. And they cost less than half of a pro G4 system, for example. Ultimately, we’ll likely edit the sound anyway, and software such as Adobe Podcast (formerly Project Shasta) can deal with most audio problems anyway. This one’s a tie. 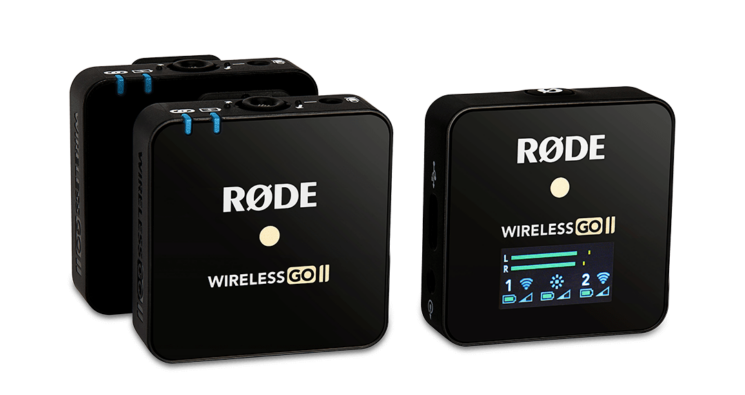 The DJI Mic is currently $329 at B&H, and the Røde Wireless Go 2 is $245. In my opinion, the difference in price is reflected in the package. The charging case and added accessories make up the difference. We also have the ability to make changes to settings directly on the DJI Mic using the OLED touch-screen display, whereas any changes we make to the Røde settings have to be done on a computer with a USB-C connection. Ultimately the Røde Wireless Go 2 is cheaper, but you get more for your money with the DJI Mic.

In my opinion, the DJI Mic won this fight. You can hear the difference in sound for yourself, as well as see Kersten and myself discuss the differences, in this episode of the Camera Shake Podcast: