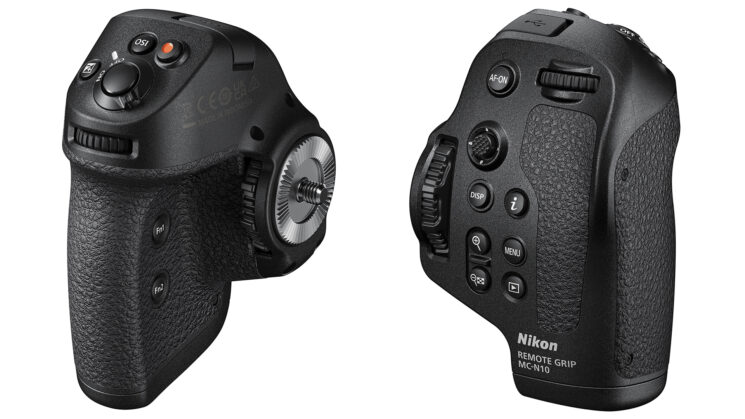 Back in April when Nikon announced the Nikon Z9 firmware update (don’t install it, there’s a newer one), they also teased the development of a new product. But not just a new product, an entirely new type of product. For Nikon, at least. It was the Nikon MC-N10 Remote Grip for use with Nikon Z mirrorless cameras. Essentially, it was a duplicate of the handgrip of the camera for remote operation.

Designed primarily for use on things like shoulder rigs, the Nikon MC-N10 grip provides a whole extra set of controls including start/stop recording, ISO, AF-ON, shutter button, ISO, exposure control, and the usual array of buttons as well as front and rear command dials and an on/off switch.

Although its primary use case of shoulder rigs is obvious, it’s also being promoted for use with tripods, gimbals and sliders, too. And I can see how it would be extremely handy in those situations for Nikon Z filmmakers. Many gimbals can actually communicate with Nikon Z cameras, but they’re not going to provide as much control as a remote handle does. A remote handle also means you can adjust things on a tripod while in the middle of a pan or tilt. And for sliders, it means you can access the controls while the camera’s moving without risking knocking it or hitting the wrong thing.

Back in April, the press release read:

Nikon says the grip is designed specifically for compatible Z series cameras. So, no DSLRs and not even all Nikon Z mirrorless cameras. Specifically, it’s compatible with the Z6 II, Z7 II and Z9, but that’s it (so far?). It essentially mirrors the controls on the camera itself, to make it feel as natural and comfortable as possible switching between your camera and the MC-N10 grip. Here’s the full list of controls from Nikon…

It incorporates an ARRI rosette for mounting to cages and other rigs and communicates with your camera via USB-C connection for what Nikon says is “lag-free communications”. So, it should be as responsive as the controls actually on the camera.  It’s powered by a pair of AA batteries, so it doesn’t take any power from the camera, although I think using the standard EN-EL15 (or whatever the current variant of it is) would’ve been more useful. Most Nikon Z shooters have a bunch of them and the industry’s spent years trying to break away from AAs. Still, it won’t suck the juice out of your camera while it’s in use.

It’s not an inexpensive accessory, though, as you would expect. For a start, this is Nikon and it’s a niche accessory, not mainstream. And it’s an extremely valuable tool for those filmmakers who often find themselves struggling to access their camera’s controls while shooting. I have to say, though, if I were considering buying into Nikon Z right now, this would definitely be a must-have item for me.

The Nikon MC-N10 is available to pre-order now for $426.95 and begins shipping on December 1st.