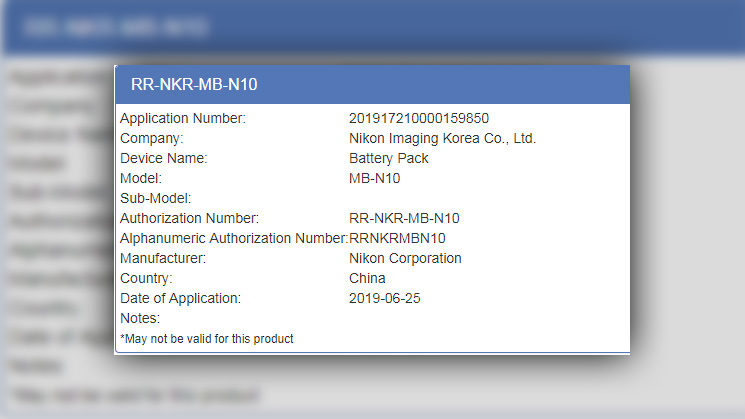 The one big downfall of mirrorless cameras over DSLRs is battery life. It’s a natural consequence of having to constantly power an LCD or electronic viewfinder. The Nikon Z7, for example, is rated for a measly 330 shots vs the Nikon D850 which is rated for 1,840 shots on a full battery charge.

But now Nikon appears to finally be getting ready to announce the MB-N10 battery grip for the Nikon Z6 and Z7 mirrorless cameras, after having registered it with the Korean Communications Commission.

The application was approved on June 25th although Nikon originally announced the development of the MB-N10 grip way back in August 2018 along with the cameras themselves. It was just a footnote on the main announcement, so was easily missed. UK photographic retailer, Park Cameras, seems to already have a listing for the new grip, confirming Nikon’s announcement, but with no other details yet. 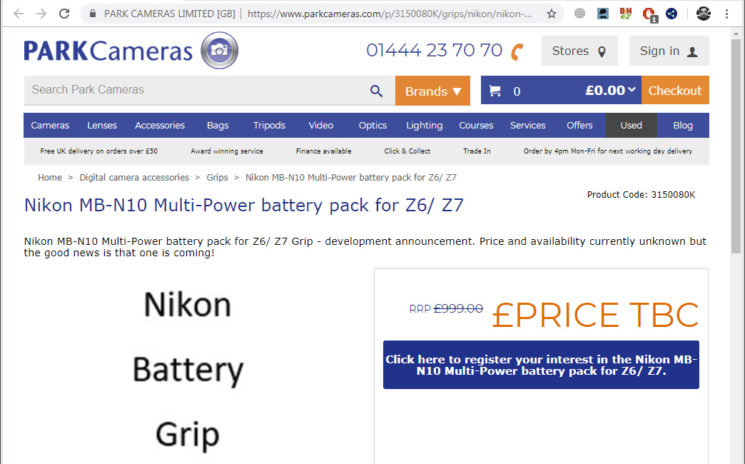 The price is still showing as “To be confirmed”, and you can “register your interest” to be kept up to date on release information. The product description essentially just relays the original Nikon announcement and really anything more.

The MB-N10 Multi-Power Battery Pack that is currently in development will hold two EN-EL15b batteries, effectively increasing the number of shots possible and/or movie recording time by approximately 1.8x. It will provide the same level of dust- and drip-resistance as the Z 7 and Z 6, and will support USB charging using the EH-7P Charging AC Adapter.

We know we can only expect around 330 shots on a full charge with the Z7 using a single battery, 1.8x more only brings us up to around 600 shots. That’s certainly much better, although it’s still not going to be on par with DSLRs.

This is just a registration, so there’s no word on a price or release date yet, or whether it will offer any improved performance to the camera in the same way the MB-D10 grip did when using the D3 battery with the Nikon D300, D300s and D700, but it does suggest that it might finally be on the way quite soon.

Watch as this Flashpoint/Godox battery pack explodes on camera

Quick Tip: How To Make A 5 Minutes Battery Pack