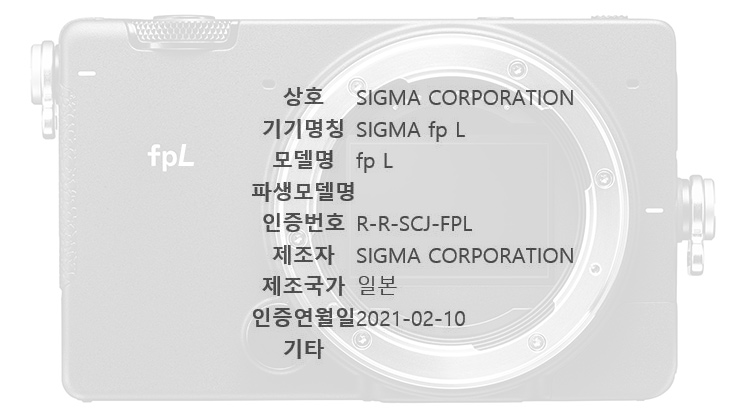 Another one from Nokishita. It appears Sigma has registered a new Sigma fp L camera body in Korea. There’s no real information about it yet except for the fact that it’s been registered, although it appears that we might be able to expect another camera soon from Sigma. Perhaps as soon as the end of this month when CP+ (virtually) begins in Japan later this month.

The Sigma fp, released in 2019, has been fairly well accepted (not adopted, but accepted), given the lack of any real customer base for Sigma outside of its lenses for non-L Mount cameras. It did pretty well in Japan, though – at least on launch. But while it has seen some success, it hasn’t brought people to L mount in droves.

The Sigma fp is not without issues, though. There’s no mechanical shutter, meaning it’s not very great for working with flash (not that anybody really supports Sigma’s flash protocol, though – why couldn’t they have licensed Panasonic’s and had access to a world of Godox, Profoto and other 3rd party lights as part of the L mount alliance?) or photographing things that move extremely quickly. Nor was it the full-frame Foveon that many people had dreamed for. It just didn’t really offer enough other than its small size (no caveats required) over Panasonic’s L mount offerings.

What might we expect to see in a follow-up body from Sigma?

Well, I still don’t think we’re going to be seeing that full-frame Foveon just yet, regardless of how many people may want it.

One benefit the Sigma fp has over other L mount bodies is that it can shoot CinemaDNG raw video footage natively straight to the memory card. It can also pipe out RAW over HDMI for external raw recording, too. Maybe we’ll see Sigma double down on the video features and produce something even more capable in that area. But perhaps with a sensor that suffers a little less from the rolling shutter jello effect.

It would be nice to see a mechanical shutter, although that’s still really only a benefit to many stills shooters if they actually get some decent 3rd party flash support. Licensing the Panasonic/Olympus flash system would probably be the most appropriate way to go if they do choose to go with a more accepted protocol. But the other option is that Sigma actually reaches out to companies like Godox, Profoto, etc. and says “Hey, let’s help you develop a Sigma version of your trigger so our customers can use your gear with our cameras!”. Wouldn’t that be nice?

Maybe we’ll find out in a couple of weeks during CP+. Maybe it’ll be a few months. I suppose we’ll have to see. Either way, I wouldn’t get your hopes up about full-frame Foveon just yet.

« Manual vs Auto vs Back Button focus – Which should you use for landscapes?
How to convert a clothing rack into a DIY camera, light & monitor stand on wheels »