The Inverse Square Law pops up in photography often, particularly for users of flash or continuous LED lights. It’s a topic that still confuses a lot of people, although the mathematics of it can be translated into easy-to-understand practical terms. In this video, from ZY Productions, we get to see both explanations to satisfy both the maths geeks as well as those who just want to know what it means in the real world.

The inverse square law is a fairly simple concept to which many things in things in this universe are bound by. It doesn’t only cover light, but also sound, electric fields, radiation, magnetism and even gravity. The formula for the inverse square law is “intensity ∝ 1/distance²”. For the non-mathematically inclined, it’s easy to see how this can be confusing. So, here’s a visual representation. 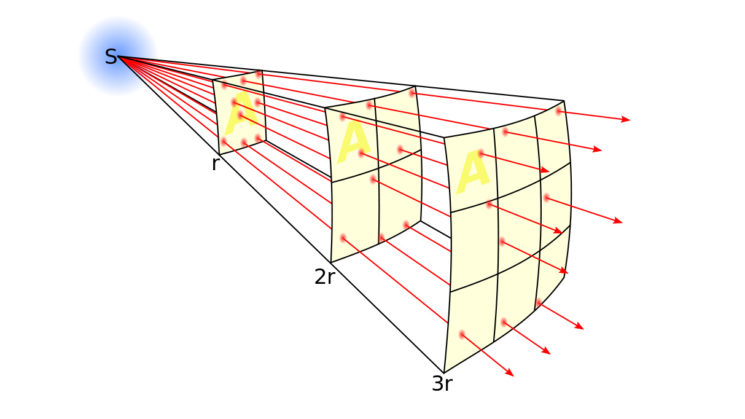 Essentially, the further you get from the source of something, the more area it has to cover. When you double the distance between the source and where you’re measuring, you double both the width and height of its spread, which means four times more overall area, thus it’s at a quarter of the previous intensity. You can see this in the image above at “r” (a set distance from the source) vs “2r” (double that distance). The squares are the same size for both, yet 2r uses four times as many squares as r.

In practical lighting terms, if you’re 1 metre away from a light source and your Sekonic tells you it’s metering at f/16 and then you move to 2 metres away from that same light source, your light meter will now read f/8 (2 stops lower or 1/4 the power). You’ve only moved 1 metre, but you’ve dropped the light intensity down to 25% of what it previously was because you’ve doubled the distance.

If you move further away from the light source, say, 10 metres, and bump up the power of your light to make your metre read f/16 and move one metre away, there will barely be any difference at all between the two readings. Maybe a couple of tenths of a stop. To see the same light loss with 10 metres as your starting point, you’d need to move 20 metres away.

This loss of light over distance is called “falloff”. The closer a light is to the subject, the more rapid the falloff. The further it is from your subject, the slower the falloff, which is why you often see photographers shooting large groups of people with very powerful lights at a substantial distance in order to reduce the falloff from one side of the group to the other (or from front to back).

It’s also why we get such even light exposure levels outdoors from the Sun at different locations. At 93 million miles away from Earth, the few thousand miles diameter of our tiny little planet makes virtually no difference to the light intensity across its surface. And it’s why I still carry a light meter around for street photography. I can meter at one end of a street, safe in the knowledge that my exposure is still going to be good at the other end of it.

The Inverse Square Law is one of those things you only really start to figure out properly by experimenting with it yourself and testing, but this video should go a long way towards helping you understand why you’re getting the results that you are.