It seems like throwing trash at one another is not behavior isolated to politicians. Scientists in Australia have witnessed wild octopuses throwing sand and shells at each other in a series of videos. This is previously unrecorded behavior and the researchers believe that it is intentional.

The rather gloriously named gloomy octopuses (Octopus tetricus) were caught in the act off the coast of Jervis Bay in New South Wales, Australia. Scientists analyzed 24 hours of footage filmed across several days and found 102 instances of the behavior in 10 different animals.

The creatures gathered materials such as silt or shells and released them while using a jet of water from their siphon. The siphon is a tube-shaped structure that can eject water quickly, to propel it through their arms and through the water. The octopi were able to propel the debris several feet.

In order to throw the material, researchers found that the octopuses had to move their siphons into an unusual position. This suggests that the action was entirely deliberate. 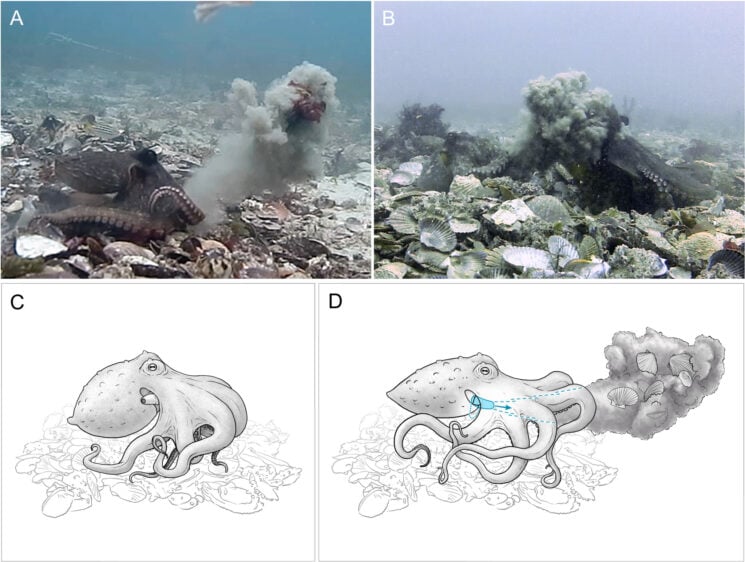 Panel A — Octopus (left) projects silt and kelp through the water; B – an octopus (right) is hit by a cloud of silt projected through the water by a throwing octopus; C – shells, silt, algae or some mixture is held in the arms preparatory to the throw, mantle is inflated preparatory to ventilation during the throw, siphon at this stage may still be visible in its usual position projecting from the gill slit above the arm crown; D – siphon is brought down over rear arm and under the web and arm crown between the rear arm pair (arms R4 and L4), and water is forcibly expelled through the siphon, with contraction of the mantle, as held debris is released, projecting debris through the water column. Illustrations by Rebecca Gelernter. (Credit: Godfrey-Smith et al., 2022, PLOS ONE, CC-BY 4.0 (https://creativecommons.org/licenses/by/4.0/))

Interestingly, the female octopuses took part in roughly two-thirds of the throws, although both sexes did engage in the unusual activity.

Octopuses can change their color depending on their mood, with darker colors generally tending towards more aggression. The researchers also found that darker-colored octopuses were more accurate in their throwing abilities. When hit, other octopi responded by waving their tentacles or trying to duck.

I find these videos of unusual animal behavior fascinating. It just shows how much we still have to learn. I also love how these octopuses seem to be hiding until they are ready to throw the material. It reminds me a little of children snowball fighting!

You can read the full research report here.

Light Painting Is All About Cute Girls Throwing Beads

« DaVinci Resolve 18.1 finally brings vertical and square video support for TikTok, Instagram and other social platforms
Is Panasonic finally going to give us phase detection autofocus in Lumix mirrorless cameras? »