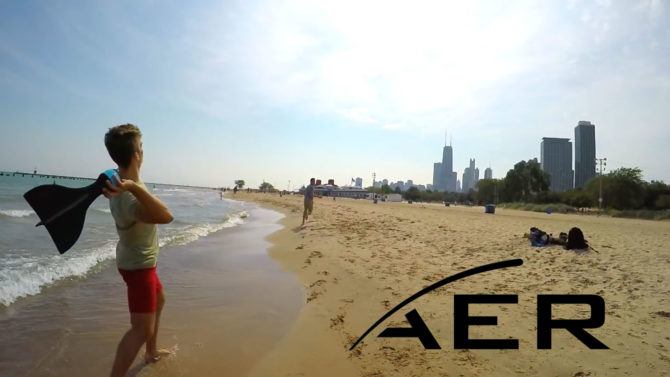 Drones have become the go-to method for getting you GoPro up in the air. But in more and more locations, new regulations limit where we can fly. But what other options do we have? Well, you could gaffer tape it to a coat hanger and swing it around your head on a piece of string. Or, you could stuff it into the front of a giant Nerf football and just throw it.

The latter is the option taken by Aer co-founder Mark de Boer and his friends. Sort of. It’s not an actual Nerf football, but the design of the Aer is very similar in appearance. You will notice, though, that this has much larger fins. These should help to keep it level and not spin wildly through the air as it travels, making for cleaner, steadier footage.

It’s an interesting concept, and fun for the beach or park with friends. It’s never going to replace a drone, but it could be a useful companion. If you find yourself in an area where drones aren’t allowed to be flown, it can be a quick way to grab some short overhead shots.

It also has the advantage of being  silent, and you can get it much closer to your subjects than you’d want to risk with a drone. You don’t need to worry about it landing in water, either.

Of course, just how high a vantage point you’ll get will depend on how good your throwing arm is. But, it’s still a neat idea for some fun footage to spice up your videos.

You can find out more about Aer over on Kickstarter, where you can currently pick up your own for €49.

What do you think? A cool idea? Handy for times when you can’t fly a drone? Or a useless gimmick you’ll get bored of in five minutes? Do you have a DIY alternative? Let us know in the comments.

« I swapped all my fancy lights for candles and iPhone flashes, here is what I made
In-depth 5D Mark IV Review – Probably not worth upgrading if you have a 5D Mark III »