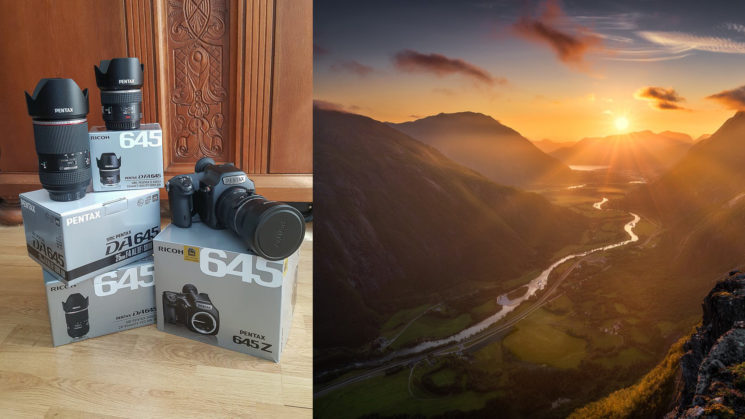 To shoot medium format has been a yearlong dream, but I have to admit I didn’t know it would be such a mind blowing experience. The Pentax 645Z (51,4 mega pixels) arrived on the market in 2014 and was the first camera to ever exceed 100 points in the DxOMark sensor test. For some unknown reason the score and review wasn’t published before 2017. There is plenty of info to be found on the internet concerning the camera specs so I won’t cover that in much detail. What is of greater interest to me and hopefully the reader is the medium format experience. 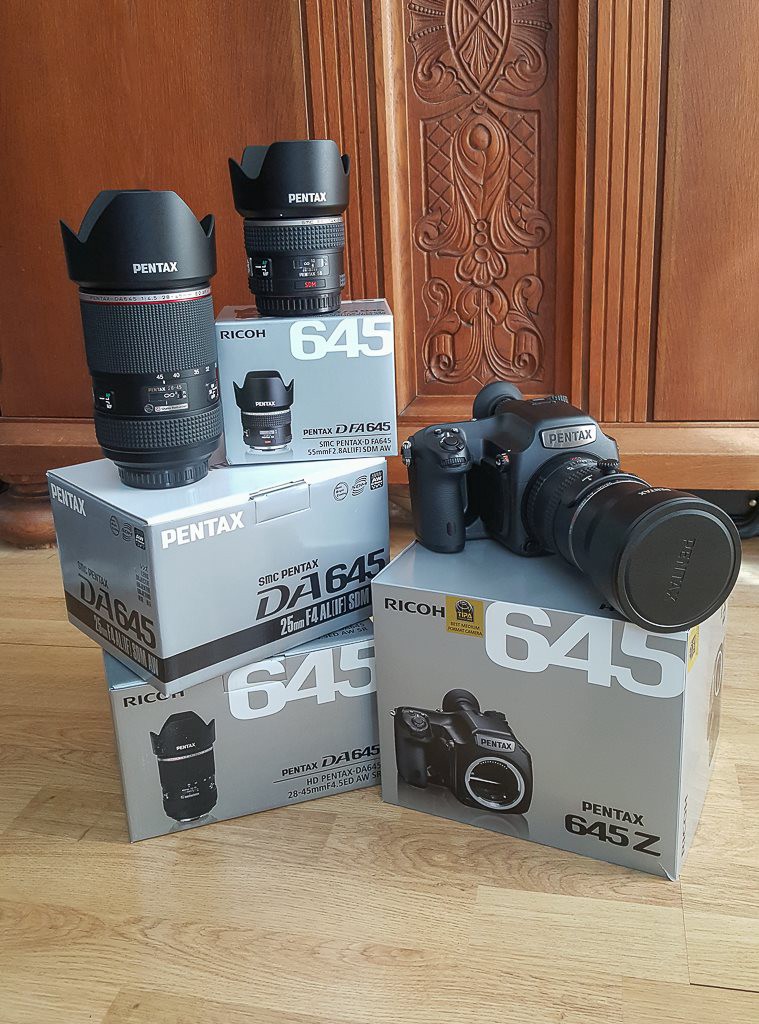 The 645Z body is larger than a regular DSLR, but it doesn’t feel heavy (1,5 kg). It actually feels surprisingly light in my hands, and with the 25mm or 28–45mm mounted it balances very well, and that includes mounted on my Sirui w-2204 with a K-20 ball-head.

As a landscape photographer my chief concerns in regards to a camera are dynamic range, details, sharpness, colors, noise and ease of use.

To make a long story short, when I the first time began pushing the 645z files I almost couldn’t believe my own eyes. The dynamic range is nothing short of breathtaking. Truth be told this absolutely doesn’t feel like a four-year-old camera — on the contrary. 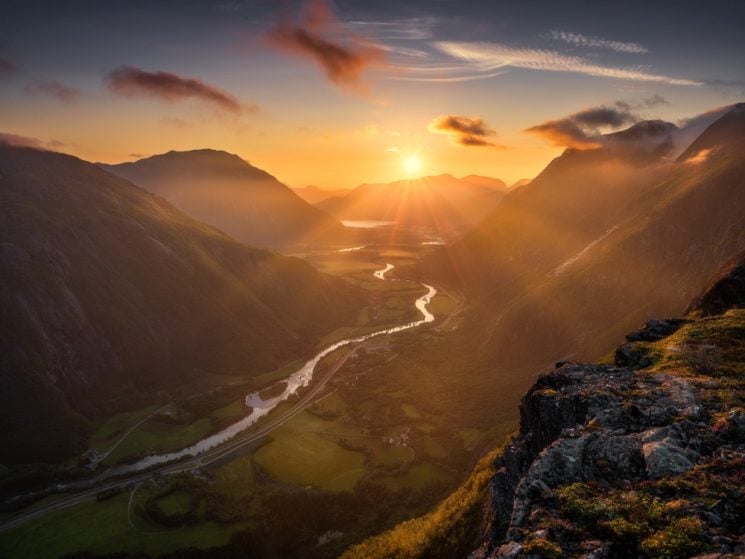 Romsdalen, Norway, offers a breathtaking scenery with mountains, steep mountain sides, valleys and waterfalls in almost every direction. The perfect location to test the capabilities of the camera. The following is a very high contrast scene with strong light radiating from behind and over the mountain ridge. I shot a panorama consisting of three verticals exposed for the highlights. This is after stitching in Lightroom and the shadows are more or less pitch black since I do the stitching before any adjustments. For panoramas I use the Sirui LE-60 leveling base. 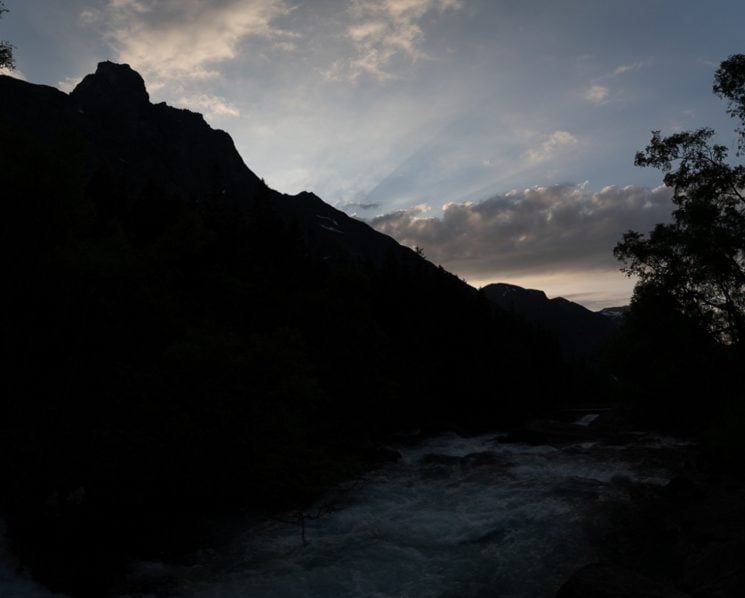 After a few minutes of adjusting sliders in Lightroom the scene has completely changed character (the image is not finished and will be further edited in Photoshop when time permits): 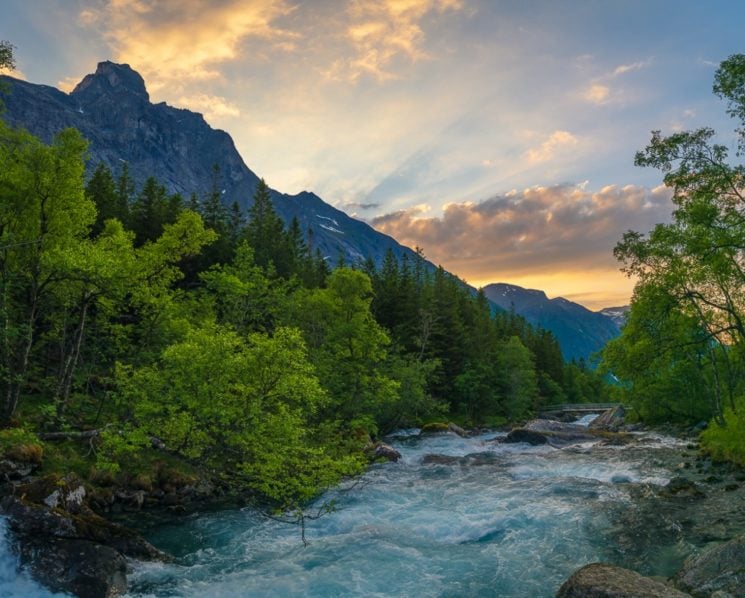 Pentax 28–45, Nisi polarizer to add contrast to the sky

The Pentax 645Z is absolutely outstanding when it comes to picking up shadows with almost zero noise added and no weird magenta color casts in the deepest shadows. It also does a very good job at recovering highlights which at first sight may look blown out.

One thing I noticed immediately I began scrutinizing my first batch of raws was the stunning amount of detail the camera captured. It must have been challenging for the Pentax developers and engineers to produce lenses which match the camera’s capabilities. However, Pentax has a long history of producing very good glass. Both the 25mm and the 28–45mm are super sharp. I have of yet not tested the 55mm. The 25mm is unfortunately discontinued, but new and used copies are still in circulation. Weighting in at 1,47 kg the 28–45 is quite a heavy lens, whereas the 25mm and 55mm are considerably lighter. 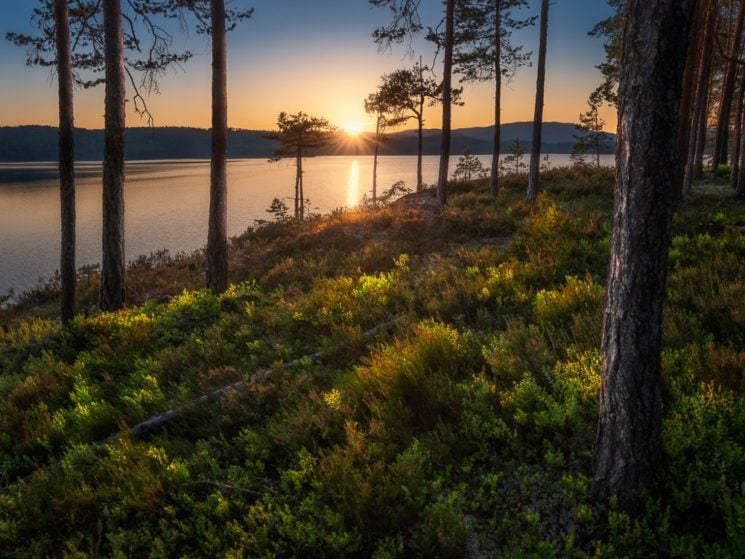 To have a zoom lens in addition to the two primes is something I consider a great advantage in terms of added flexibility when being out in the field. I am not very fond of long treks which probably has something to do with my impatient and restless nature. In other words, carrying that extra weight of the 28–45 isn’t a big issue for me.

It is also noteworthy that the 28–45 is 82mm and thus takes regular filters. The 25mm has this clever in-lense polarizer solution, and the Nisi 150mm filter holder for the Tokina 16–28 fits the lens. The camera sensor has a crop factor of 0.79 so that for instance 25mm equals 19,5mm full frame.

This is upstream Isterdalen in Romsdalen. The famous Trollstigen is ahead of us. There is no need for a L-bracket on the 645Z. I have mounted two Sirui plates on either side of the camera something which makes shooting verticals a breeze. Clever of Ricoh/Pentax to implement two mounting holes — one for each orientation. 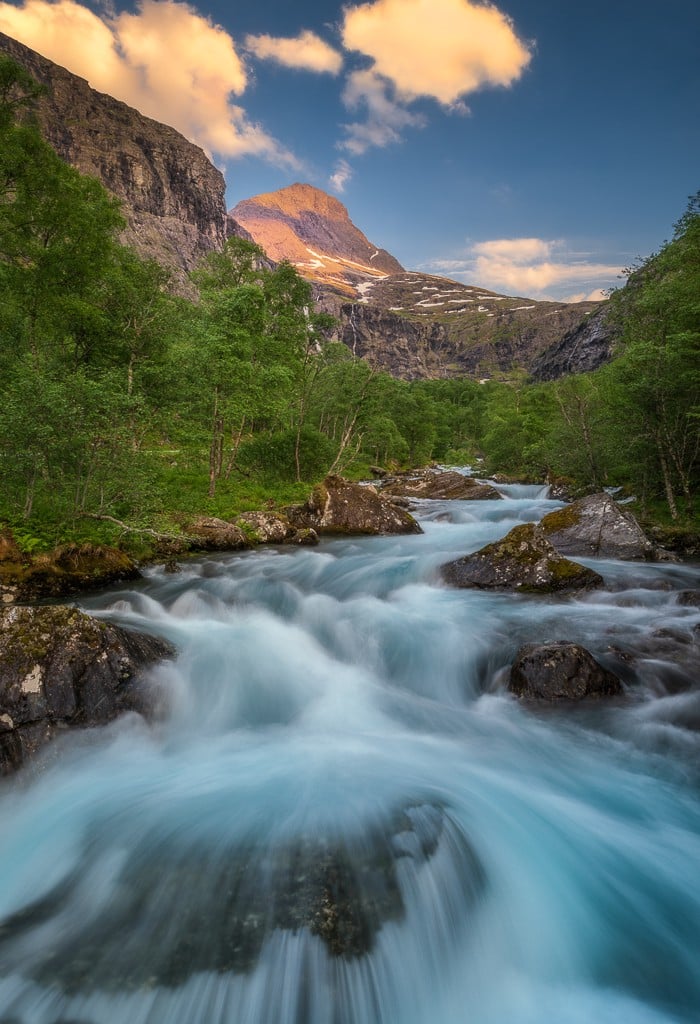 Who needs more detail than this: 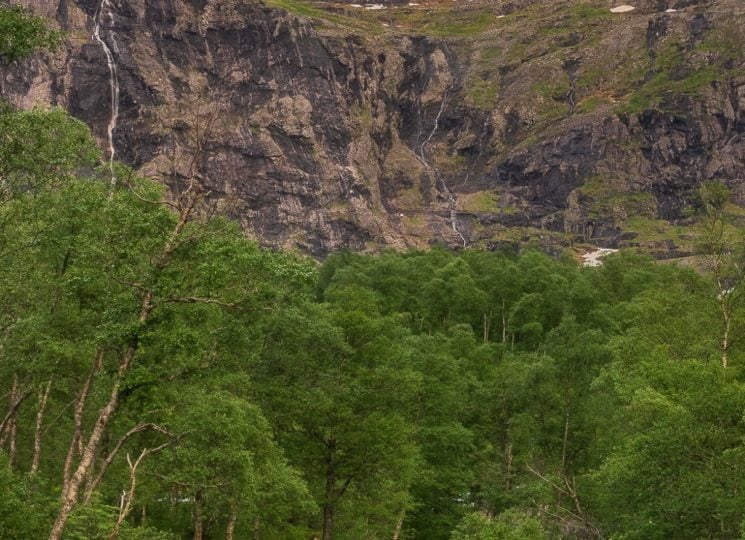 Very close crop from image above

The Pentax K-1 and Pentax K-1 Mark ii have spoiled me with great, pleasing and vibrant colors. Not surprisingly perhaps does the Pentax Medium format flagship excel also in this field. It doesn’t take much in for instance Lightroom to bring out colors and color contrast. 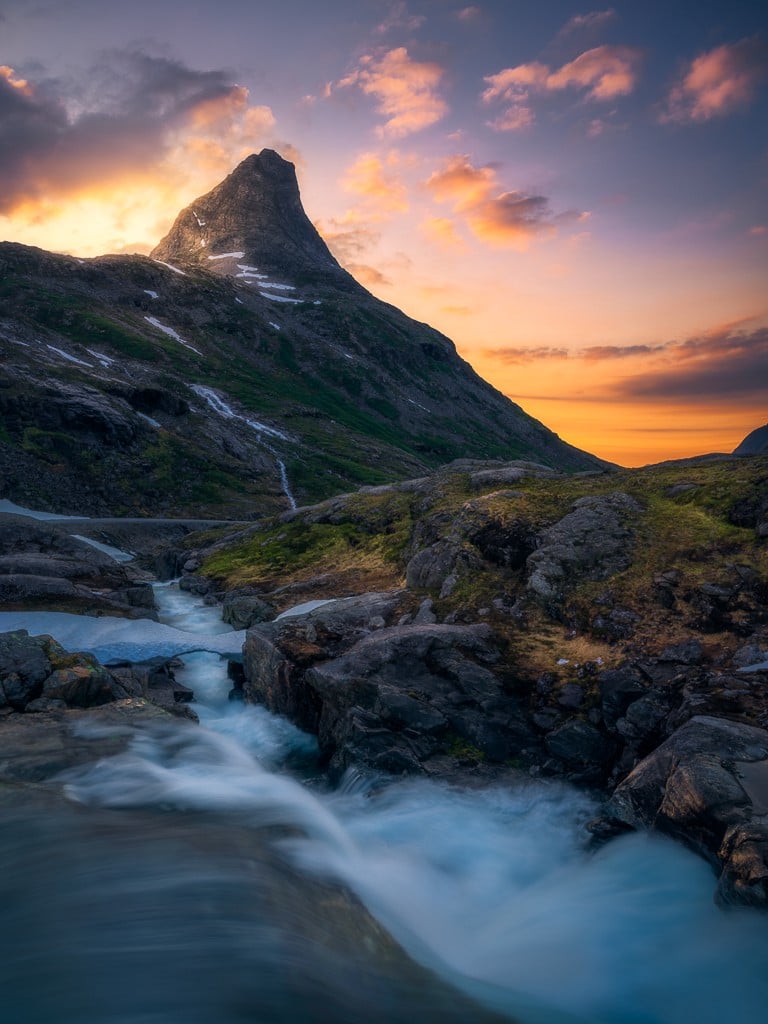 Sunsets in the southern parts of Norway can be very intense and beautiful during summer. This is from my home turf around 60 km north of Oslo, and I am very pleased with how the 645Z renders the warm tones. 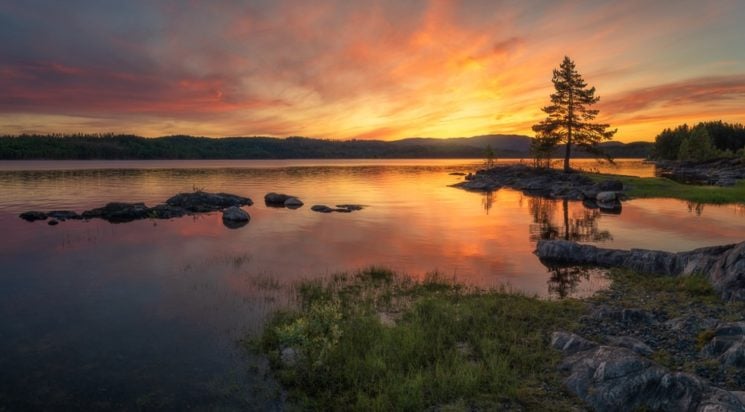 Both lenses produce very pleasing sunstars. I may be wrong but I believe this image is a once in a lifetime experience. The sun rose in such a way that it sailed between two mountain peaks before it was obscured by the mountain to the right. The sighting only lasted a couple minutes, and the sun took on an intense and beautiful color which cast a warm glow across the scene. 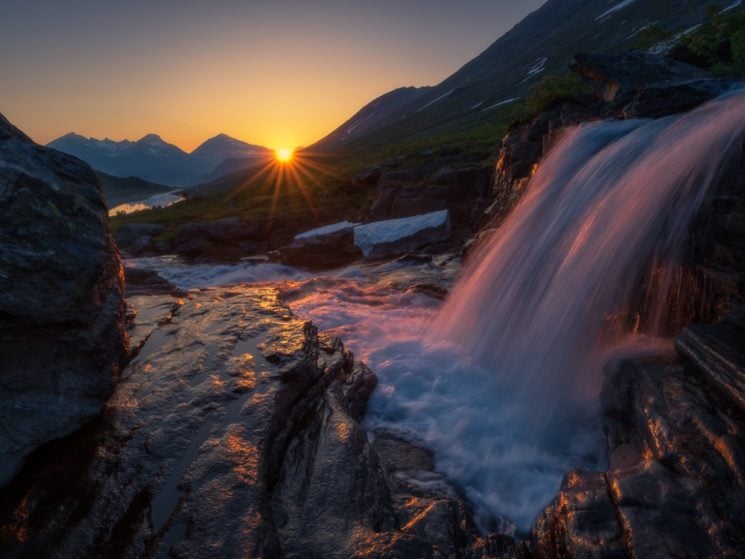 For my second outing with the 645Z I headed to Rjukandefossen, Hemsedal, Norway. I was a tad unhappy that I had to move over to this side of the waterfall in order to capture the setting sun, because that meant walking across a suspiciously looking suspension bridge about which I had my doubts would carry my 95 kg plus camera gear. Working out with weights and doing landscape photography isn’t perhaps the best combination. 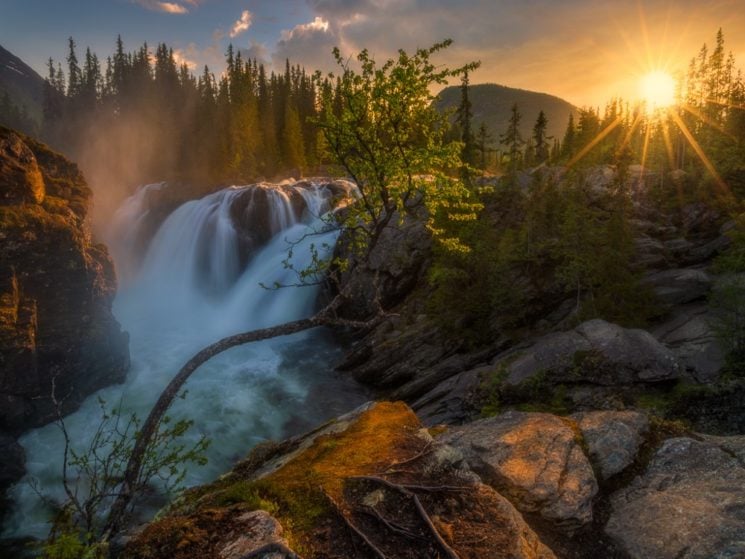 Pentax 25mm — the scene is actually shot at f32

The transition to the 4:3 format has gone surprisingly smooth. I find the format increasingly pleasing, and it opens up new possibilities compositional wise. The format has also challenged me to think outside the box something which isn’t exactly one of my strong sides. In addition to the aforementioned, I also notice that I am far more inclined to shoot panoramas with the 645Z than what is the case with my other cameras.

Menus are easy to navigate and it doesn’t take long before one knows where to find the various settings — everything is very intuitive. A dedicated button on the camera body itself makes it very simple to shoot bracketed if so desired. The “Info” button option on the back of the camera provides a convenient short-cut to the often most used settings. The ability to have a histogram in Live-View is very handy notably when shooting long exposures. A dedicated mirror lockup switch is also found on the camera body. I have a tendency of forgetting that it exists but as of yet none of my shots have been ruined by shutter shock or vibrations. 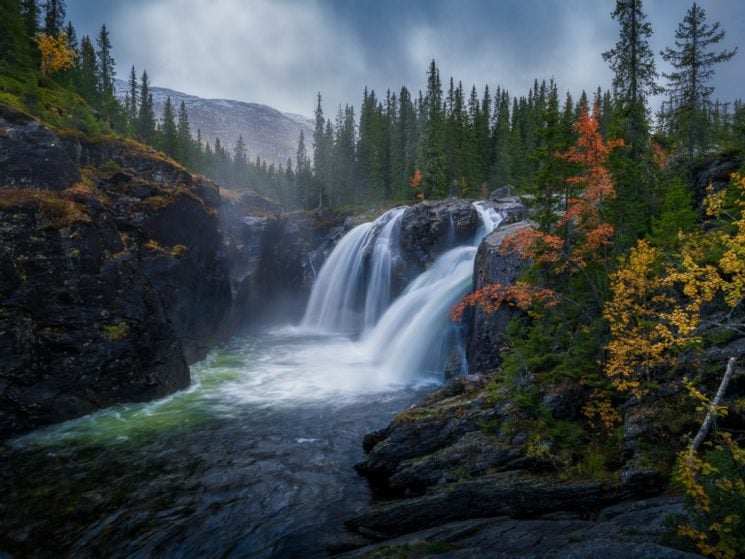 I have had no computer issues with the relatively large files the 645Z produces. My i7 laptop has effortlessly stitched and edited a seven frame pano scene. Even my i5 travel laptop has without great problems stitched three frame panoramas.

The Pentax 645Z is a value for money camera, and Ricoh/Pentax has thus made medium format available to a huge group of photographers who otherwise couldn’t have afforded a medium format system. In true Pentax spirit, the system is of course thoroughly weather sealed. 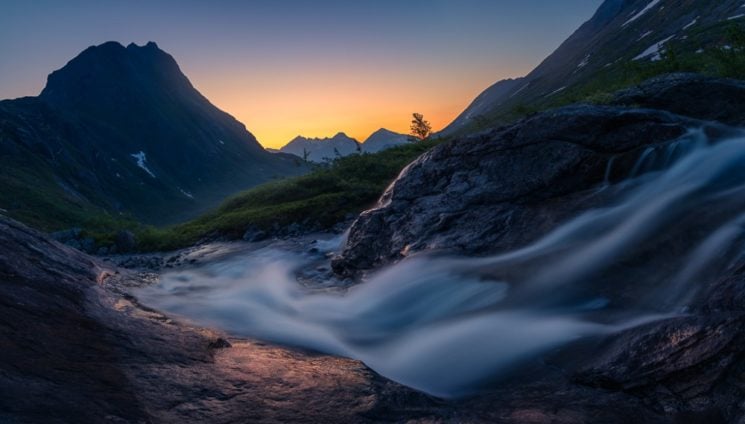 We will end this review with a four frame panorama of the more or less famous cabin scene. A cabin to which I have developed a love/hate relationship. Admittedly, during my first years with a camera I shot this location “to death”. I have received some criticism for this. Rightly so, I would add. The criticism has had an effect on me that it has pushed me out of my comfort zone, so it is all positive. This is a scene which has offered me much fun and provided me with many great memories. Anyway, we are in this instance dealing with yet another extreme high contrast scene. The sun had just set behind the hill so the light bleeding into the sky was very strong. No filters were used to balance the light since I wanted to give the 645Z a really tough challenge. Well, the camera was up for the challenge.

Pentax 28–45. A white background doesn’t favor images like this, unfortunately.

The camera with three lenses and the Nisi 100 mm filter system neatly fit into a Lowepro Whistler BP 450 AW. 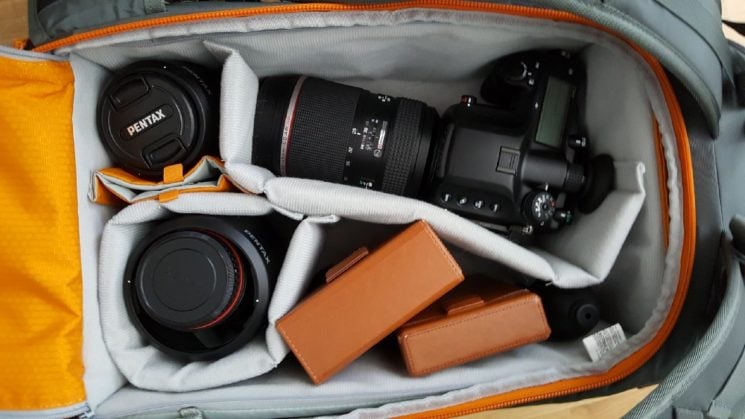 End notes: When this article was posted I had had the 645Z for two weeks. I almost exclusively shoot manual focus so if you are curious about the camera’s autofocus system there are other sources available. A few images have been added to the article after it was first posted.

Does size really matter? Why some pros switched from DSLRs to medium format

Leaked photos and newly-rumored specs of Pentax’s upcoming full-frame DSLR, the K-1
« Samsung to acquire Corephotonics and 25x zoom smartphone camera tech
Nikon is offering up to $400 discount to convince you to go mirrorless with a Z6 or Z7 »