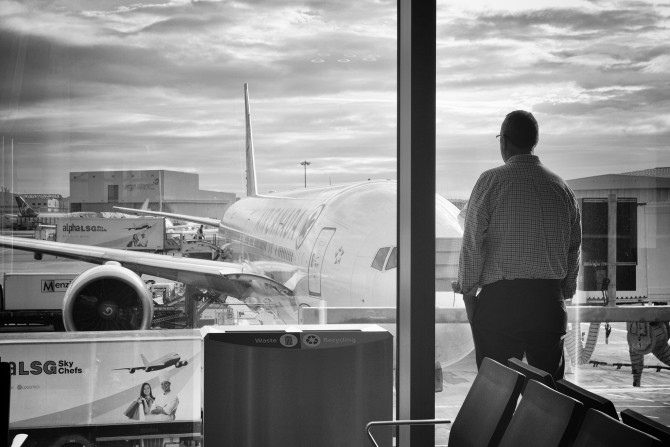 As photographer’s rights continue to make their way to the headlines, the Washington Post chimed in on the subject with a public service announcement of sorts informing photographers of the restrictions in which many commercial airlines are beginning to enforce. While it may not come as a surprise to many of you that airline employees have the right to tell photographers to turn off their cameras, the lack of an actual policy may be slightly more unexpected.

When American Airlines passenger, Arash Shirazi, was confronted by a gate agent at the Reagan National terminal in Washington D.C. and sharply told he needed to stop taking photos of the aircraft, which he intended to share with his friends via social media.

Shirazi told the Washington Post the agent “demanded to know why I was taking a picture of airport equipment. I showed her the picture and offered to delete it, but she became even more combative, accusing me of being a security threat. She made it a point to tell me that she was going to document this security breach in my travel record.”

The agent remained to be abrupt with Shirazi, even after he apologized and let her know that, as a frequent flier, he was unaware of any policy which prevented him from taking photos while waiting to board an aircraft.

According to Andrea Huguely, a spokeswoman for American Airlines, the carrier has updated their internal policy regarding customers taking photos citing, “The policy is in place to protect employees and customers.” According to the internal policy any airline worker including gate agents, baggage handlers, and onboard personnel to prevent individuals from taking photos. The problem is, the policy is not printed anywhere in which customers are able to see or read it, which seems to be a glaring omission.

A similar incident happened in Albuquerque when Steven Leslie began filming the onboard crew of JetBlue plane when he noticed them insisting another passenger, a young boy with cancer, to exit the aircraft after the crew became worried by the appearance of the child’s health–despite the boy’s parents having already medically cleared the boy to fly.

The family and the boy left the plane, then the crew turned their attention to Leslie, demanding he delete the video. After he refused, Leslie, too, was removed from the plane.

JetBlue eventually apologized for the incident, but defended themselves by saying one of their crew members did not “feel safe” being photographed, adding the crew member asking Leslie to delete the video fell into “gray area”. Unfortunately, Leslie had no real way of knowing the airlines policy regarding what he may and may not photograph, as JetBlue also has no official policy posted anywhere which can be accessed by the public.

JetBlue spokesman, Morgan Johnston told the Washington Post, “Our crew members use their professional judgment in evaluating the appropriate use of photography or videography onboard, especially when it involves the privacy of other customers and the safe and secure operations of the airline.”

Are Airlines Allowed To Do That?

As it turns out, yes, airlines do have the right to demand you not take photographs, so long as you are not on public property. According to attorney Daniel Greenberg, “You can’t prohibit photography in public. But the prohibition of photography on private property is legitimate. That decision is up to the property owner. If you don’t want to follow the carrier’s rules, don’t get on the carrier’s plane.”

Unfortunately, that doesn’t leave you many options. Essentially, you just need to be careful of what you’re shooting. For starters, avoid photographing other people, such as airline employees. Because airlines are desperately trying to avoid becoming the subject of a viral video and all the bad publicity that comes with it, and their focus on security (however, misguided it may be), photographing at airports and on airplanes is becoming an increasingly touchy subject. Something to keep in mind on your future travels if you want to avoid any conflict.