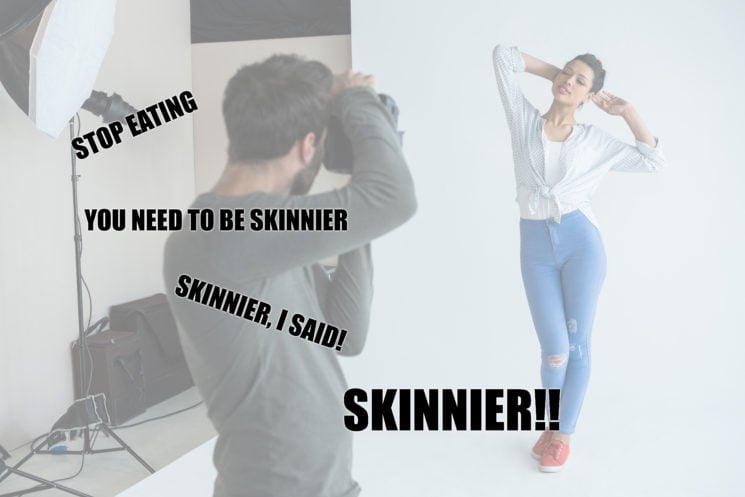 Even as an anonymous, regular girl, I can tell you that “beauty standards” are a tiring thing, wrecking women’s mental health since… I don’t know, probably forever.  But if you’re a model or a celebrity, I can only imagine how bad it can get.

A model named Liz, a.k.a. Thewizardliz, recently witnessed just how toxic “beauty standards” are. During a photo shoot, a photographer told her to stop eating so she could lose weight until the next shoot. She reacted fiercely and emotionally, standing up for herself and women in general. Her friend caught it on camera, and it turned into a video that quickly went viral and gained a flood of comments.

I first saw the video on Alex Light’s profile after my friend shared it on her Instagram Stories. In the video, Liz wrote that the photographer had told her to not eat until the next shoot so that she would lose weight. She got furious and spoke up, telling the photographer that this would develop an eating disorder.

“You are very lucky that I have security in my body and that I love myself,” she said. “But if there was another model who was standing here and was insecure about her body, that one comment that you made would literally make her go insane.”

“She would literally stop eating, weighing her food, her hair would fall out, her organs can fie… She could die because of that one comment you made. You should watch how you talk to people. … I’m already very skinny, and even if I wasn’t, you’re not allowed to tell me what to do with my body.”

The video received tons of comments on both Liz’s and Alex’s Instagram. Of course, many of them are pissed at the photographer, and rightfully so – I am too.  Other models also shared the experiences they had while working in the industry. It was just devastating to once again confirm how our bodies are never considered good enough, and all these women are freaking beautiful!

“I am beyond shocked by all the love and support I received for this video,” Liz wrote in an Instagram post. “I really didn’t want to post it cause I felt like I might reacted too harsh… but I am not doing this for me.”

“I’m doing it for my younger self who developed an ED cause of people like this who constantly told me what and when I should or shouldn’t eat. I am doing this for every girl/boy out there who has suffered or is still suffering from an ED, for everyone who has been put down and didn’t feel comfortable speaking up. You are worthy, you CAN and SHOULD defend yourself. My body is perfect not because I am “skinny” but because I am healthy alhamdulillah. I love my body and so should everyone. May all of you be blessed and get everything your heart desires. Thank you so much for validating my feelings and making me feel worthy.”

Even though Liz may have reacted too emotionally, I can’t blame her. It may not be professional, but neither is a comment like “stop eating so you can lose weight.” I know a lot of girls with eating disorders. I have a strange relationship with food and my appearance as well. And I know that all of us would be triggered by a comment like this – some would be sad for days, others would stop eating, and yet the others would emotionally overeat.

So, dear photographers (and everyone else, for that matter), stop making comments about other people’s bodies, unless you want to tell them how beautiful they are. Nothing good will ever come out of you telling them to change the way they look!