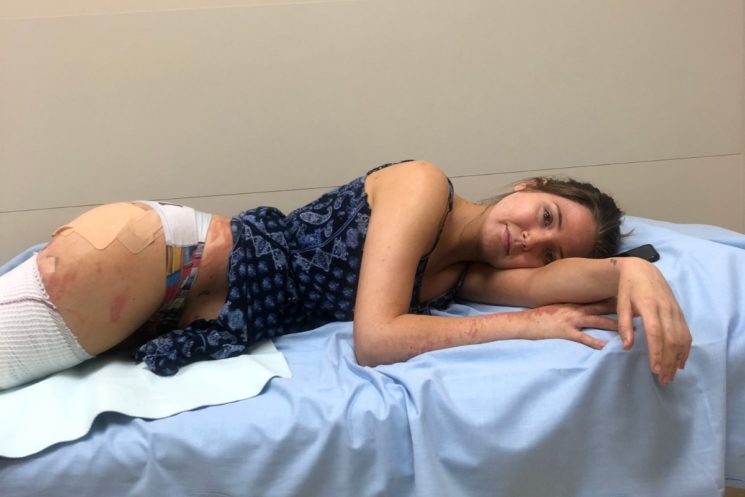 Using fire in photography is not a new idea. But it’s one that requires the utmost respect. We’ve featured a number of photographers here on DIYP who work with fire the right way, including this one from Von Wong, who had a crew of around 50 people helping to maximise safety and be able to respond quickly in the event of an accident. Not everybody is as well planned, though.

22-year-old international student and freelance model Robyn-Lee Jansen is currently residing in a Vancouver hospital recovering from first and second-degree burns as the result of what she describes as “negligence and recklessness on the unnamed photographer’s behalf”. And, if Jansen’s account is true, I’m inclined to agree.

Jansen describes what happened on a GoFundMe campaign (warning, it contains some pretty graphic images) to assist with her financial issues surrounding this situation. Seeking legal help, covering lost wages and dealing with extra medical expenses that she isn’t covered for.

On June 13th, Jansen attended a freelance modelling job, where the photographer wanted to work with fire, “behind me from a distance”, Jansen writes. She says that he had been vouched for by other models and assured the model that it was safe.

The shoot began as many do and she says things were fine until it was time to light up the fire. She says that he seems rushed, that he had been interrupted several times by phone calls from his family and that the shoot was running late, and, well, I’ll let Jansen tell it…

He proceeded to work with fire behind me, and then yelled, “stand still, this part gets tricky!”. Before I could even ask what he wanted to try, or any sort of explanation, he squirted a bottle of liquid paraffin oil while standing closer to me. The next thing I knew, I was up in flames.

It was one of the most traumatic and terrifying moments of my life. I managed to drop duck and roll into a puddle and get the flames out. As a result, I have been left with second degree burns over 25% of my legs and first degree burns on my anterior legs, hip, back, and right arm. To make matters worse, I was in shock and the photographer insisted he would drive me to the ER. In a panic, he made me wait until he was finished packing up all of his camera equipment before he would take me.

At the moment, Jansen is unable to work as she can’t even walk, let alone model. She’s had to cancel all of her paid work for the next 2-3 months, and will likely be left with some pretty severe scars that might hinder her future modelling career. While she’s not working, she still has bills to pay. Many have suggested that she sue the photographer. I agree, and Jansen wants to, but that doesn’t come cheap, especially as an international student. Hence the creation of the GoFundMe.

Jansen’s other goal with the GoFundMe campaign is to raise awareness and warn other models about shoot safety. If the photographer is unable to explain the process to you when shooting something risky, or simply doesn’t take the time to, then that’s a big red flag. Don’t just take other peoples word that the person knows what they’re doing. Have them prove it to you.

And if they can’t? Well, don’t do the shoot. That simple.

I don’t mess with fire in my own photo shoots, but I do shoot in quite a few dangerous locations where there are real risks of injury. There is a lot of prep work and planning that goes into those shoots, and all in attendance (models, make up artists, assistants, everybody) are made fully aware of all the dangers well in advance.

But, for those of you considering using fire in your shoots… Either don’t. Or make damn sure you know what you’re doing!

All of us here at DIYP wish Robyn a speedy recovery.

Update: To clarify, the photographer was not Von Wong. He was mentioned in the post as an example of how fire can be used the RIGHT way on a photo shoot. The photographer in this incident has not been publicly named.

Family photo-shoot gone wrong and the internet is exploding

« The ESA plans to photograph a comet from the dawn of the Solar System
Photographers, this is why you should stop comparing yourself to others »