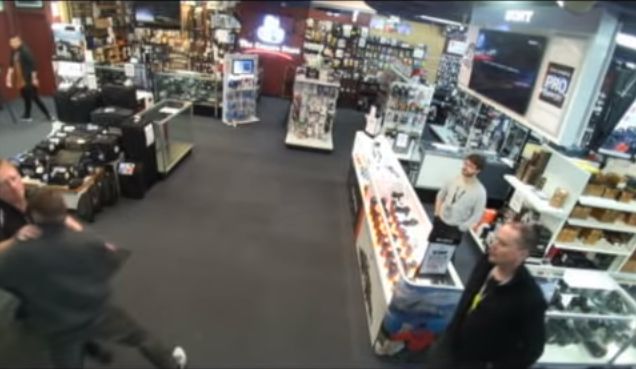 On Thursday, 16 May 2019, The Camera Store in Canada was robbed. A man took a Sony A7R III and Sony 16-35mm F2.8 G Master lens, and when the staff tried to stop him – the man attacked them with bear spray and managed to escape.

On their blog, the guys from The Camera Store explained what happened in their Calgary-based store. The robbery happened in broad daylight, around 5 pm. They described the robber as “a middle-aged man in a grey jacket, dark pants, light runners, and sunglasses perched on his head.” The staff added that they knew there’d been something “off” about him since the moment he walked in. As they saw him, the whole team was on high-alert.

“Sure enough, he reached down to check his phone for a moment, then dashed for the door with our camera in hand. One staff member attempted to intercept him and was shoved out of the way. Two other employees chased him out foot down the street. The man paused and sprayed a can of bear spray towards our staff, then hopped into a black pick-up truck. Our camera was gone, and our staff’s eyes burned as they came back to the store where we called the Calgary police who were fast to respond to the scene.”

The video below shows the moment when the robber rushed out, with the staff trying to stop him:

The Camera Store team explains that it’s not their policy to chase down thieves. However, they admire the loyalty and bravery of the staff who risked their safety to do so. They invite everyone who knows anything related to this crime to contact them at 403-234-9935. Alternatively, if you spot a Sony A7R III with a Sony 16-35mm lens on any shopping site, please email the link to evelyn@thecamerastore.com. Here are the gear details:

The same store was burgled in late 2017 for the first time in over two decades of business. The thieves broke in during the night and took $35,000 worth of gear. Shortly after the robbery, the police caught the suspected thief and returned the stolen Hasselblad to the store, and the stolen Leica was returned four days later. I hope that The Camera Store will recover their recently stolen gear soon and that the thief will be caught. And needless to say, I hope that the guys from the staff have recovered and that this won’t happen again.

More than 50 journalists attacked during anti-Pride protest in Georgia, one dies