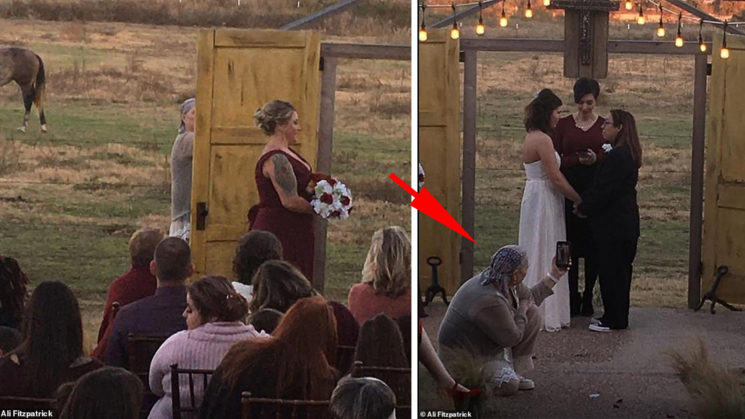 Wedding photographers sometimes rant about guests who stand in the way with their phones. But at a recent wedding in Minnesota, this got a whole new dimension. It wasn’t guests who got in the way of the photographer (and everyone else) – but someone who appears to be a stranger.

Ali Fitzpatrick from Minnesota shared a few snaps from the wedding to a Facebook group called That’s It I’m Wedding Shaming. She explained what happened in her post: “A wedding I went to today had this lady all up in all the shots and she even went all around the couple and behind the altar to take videos and pictures.”

She added that she didn’t block anyone’s face because she had the bride’s approval. She notes that the brides were “totally annoyed at this lady they barely knew.” The photographer had to ask her to move several times so he could take photos of the brides.

People were quick to comment and express their opinion in the comments. Of course, many of them were wondering why no one escorted the woman out of the wedding or why the ceremony wasn’t stopped until she left. Others believed it should have been bridesmaids or ushers to deal with the situation. One commenter wonders if the photographer could simply edit the woman out.

It’s not quite clear whether the woman is just a random stranger who was passing by and decided to snap photos. If so, than this is beyond weird in addition to being rude. If she was one of the guests – well, then it’s just rude.

The most… interesting comment I read is this: “the proffessional [sic] photographer should have not taken photos whilst she was doing that ,,,” Why, though? They should take photos throughout the wedding, but also ask the intruders to move if they’re in the way in order to capture the important moments. According to the post, this was exactly what the wedding photographer did in this case. Although, it apparently took a few attempts.

This makes me wonder: what would you do as a photographer is someone did this? Would you be the one asking the person to move? Or you think it’s someone else’s job?

Dear wedding guests, this is how not to take a photo during the ceremony