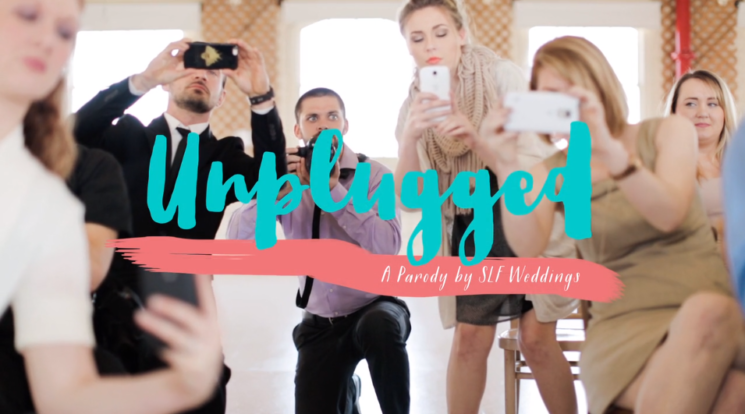 We’ve seen a lot of rants about wedding guests taking photos with their phones. They not only get in the way of professional photographers, but also the marrying couples aren’t happy to see a bunch of phones instead of their guests’ faces. SLF Weddings made a fantastic video about this named Unplugged. And rather than being a rant, it’s a parody calling out on these guests in a pretty funny way.

The video doesn’t only mention the guests who get in the photographer’s way with their phones. It doesn’t spare the photographer guest “who came to take some shots for his portfolio,” the auntie with a DSLR and a pop-up flash, or the uncle who takes photos with an iPad. If you are a wedding photographer (or you had your wedding in the past decade or so) – I think you’ll love this.

Although this video is a parody, it’s not that far from the truth. First of all, it’s true that people stare at their phones and tablets rather than sharing the once-in-a-lifetime moment with the couple. I think that’s pretty sad (and kinda scary), and it happens everywhere, not just at the weddings.

When it comes to guests getting in the photographer’s way, there are reasons why both photographers and the marrying couples complain about it. First, you’re making the photographer’s job much more difficult as he tries to capture the important moments and not have your iPad or selfie stick in the frame. I think this is an obvious one. When it comes to the couples – they paid for the professional photographer, and it costs a lot. So, if you’re constantly interfering, you’re ruining the shots for them, too.

In addition, smartphone snapshots can’t be better than the photos taken by the professionals who were hired to do it. This reminded me of Eirik Halvorsen’s blog post: he shared his guests’ snapshots and showed what he and his wife would have ended up with if they hadn’t hired a professional photographer.

Now, I haven’t had my wedding yet, and I’m not a wedding photographer. But, as a wedding guest, I must say I’m not into banning the phones completely. I (maybe naively) believe there can be some sort of a compromise. I think that the couples should tell their guests to forget about the phones during the ceremony. I mean, since the people obviously don’t have the need to do it themselves and just share the moment with the couple. I’d also ask them not to use the phones during the moments like cutting the cake and other once-in-a-lifetime moments like that. But, during the party – I’d let them take all the snapshots they want. At least it’s my way of making a compromise in this situation, and of course – I may be wrong. But we’ll see what it will be like when/if I get married.

What do you think? Should the guests be completely banned from using phones, tablets, selfie sticks and the like at the weddings? Or there can be some sort of a compromise?

Dear wedding guests, this is how not to take a photo during the ceremony

« Pentax announce two new 50mm and 11-18mm “star series” lenses for super-high resolution photography
A man photoshops himself into his childhood photos, and the result is mind-blowing »