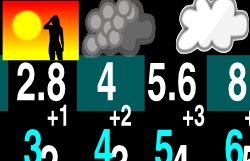 when I was your age we used to squint/half squint to measure light!

OK, I am not that old. Actually my father didn’t even take photographs beyond the average vacation on the beach photo.

Yet, there are times when you have to calculate exposure manually, or even harder, calculate flash settings. Mixing flash and ambient is no rocket science – to quote a certain DH. However, it seems that one of the issues that is hard on everyone is when to start in terms of aperture, shutter speed and flash output.

Photographer Domjan Svilkovic came up with a nifty little card that can help you do just that using the ultra highly modifiable yet super cheap YN460 strobe. I would go and say that it may be considered a printable flash meter. Seems that the low price is driving those to be very popular.

The card and instructions after the jump.

It’s not meant to be more precise than 1 f-stop but it should give you a very good starting point. The flash power levels are given for 2 meter subject distance at ISO100. It is also assumed you can get away with a 1/250s sync-speed (if not, 1/200s should be close enough) – important only when also calculating the ambient exposure.

The chart consists of several connected ‘scales’. First, there is a main scale that goes from 0.5 to 22 in a typical 1-stop increments. This scale is used both for aperture and distance (in meters). Below the main scale is a small -4 to +7 scale that is primary used to quickly calculate how much more/less light you need if you change the subject distance. For example, with the subject at 8m you need 4 stops more light than at the default 2m subject distance.

At the bottom right there are two power scales for two different YN flashes. They connect the flash power level with the aperture at the standard ISO100 and 2m subject distance. For example, with a YN460 you get a correctly exposed photo at ISO100, 2m, f/5.6, power level 5.

In the lower left corner there is a ISO ‘scale’ that tells you how many more stops of light do you get if you use some higher ISO. It the top right corner there is a list of icons depicting the ambient light level (sunset, heavy overcast, light overcast, sunny and snow/beach) at 1/250s. To correctly expose on the sunny day you have to use the f/11 aperture (below the sun icon) at ISO100, 1/250s.

The chart can be used in a lot of different ways. I’ll give just two examples:

You are shooting outside on a bright sunny day and would like to be able to get a deep blue, a bit underexposed sky by flashing the subject with a bare YN460-II at power level 6 (to get an near instant recycle). At what distance should you put your flash and what aperture should you use?