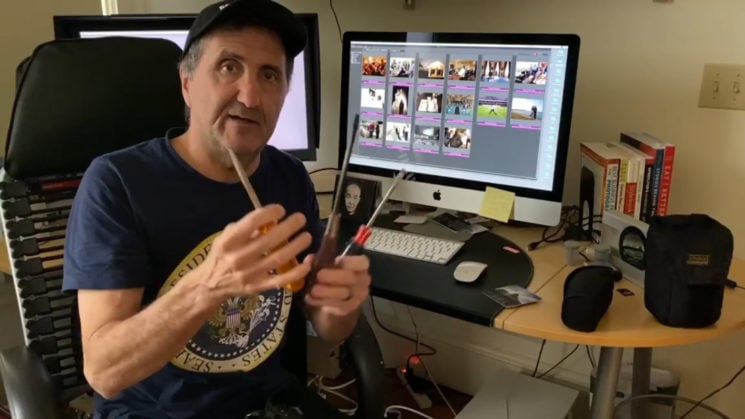 These days, most people know the name, Pete Souza. He’s been the official White House photographer twice – for Presidents Ronald Reagan and Barack Obama – as well as being a photographer for The Chicago Tribune for many years in between. He’s often asked what’s in his camera bags and what he uses to shoot his work.

He’s spoken about it a little in the past, but now Souza has posted an 11-and-a-half-minute video to Instagram going over the gear he used while following the president, how he used it and why he chose those specific items. He also walks us through some of the images he shot, the challenges he faced and how he overcame them.

At the beginning of the video, Souza impresses the point that a camera is just a tool – as are the lenses and every other piece of kit many of us might choose to use. Holding up a handful of screwdrivers, Souza says “These are all screwdrivers. They all work equally well. I don’t know what brand/model they are. You just have to make a decision yourself on what kind of equipment to use”. Essentially saying that it’s going to boil down to your own needs, and whether the tools you choose to use can satisfy those needs.

Souza’s list remains largely unchanged from when he was actively shooting in the White House. He still mainly uses a pair of Canon 5D Mark III bodies, with 35mm f/1.4L and 135mm f/2L prime along with the Canon 24-70mm f/2.8L II USM zoom lens (the “II” is important – he didn’t rate the first version of this lens at all). Pete also occasionally packed a speedlight, for overly backlit “grip & grin” portraits in the oval office to help balance out the exposure.

His mirrorless gear has changed a little, though. Previously Souza had been shooting with a Fujifilm X100S and 23mm f/2 lens. The lens remains the same, although the camera has since been upgraded to a Fuji X-Pro2 – which as well as being nice and lightweight during Souza’s personal shooting time, is also extremely quiet, allowing him to shoot in environments where a DSLR wouldn’t be possible.

Although Souza has had access to get pretty much any camera gear he could ever need, but his kit remains quite modest. But once you have the right tools for the job, then anything else often just gets in the way.