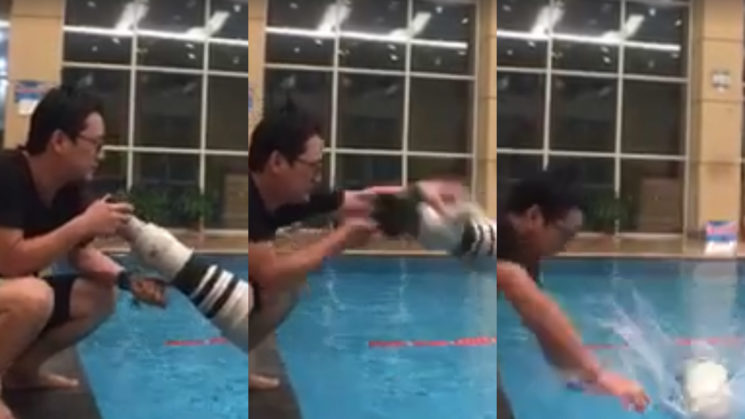 Most of us have done something risky on a shoot before. And if we haven’t, we probably will at some point. Perhaps we perched our camera or an expensive flash somewhere precariously for a shot. Maybe it even paid off, and perhaps it didn’t.

For one photographer, the risk certainly didn’t pay off, as he drops what looks like a Canon 500mm f/4L IS lens and 5D style DSLR body straight into a swimming pool. That’s an expensive risk to take, and an expensive mistake to make.

Posted to Facebook and shared in a number of groups, the video has seen varied comments ranging from empathy for his situation to asking why he couldn’t just step back from the water with a lens so long. This latter suggestion naturally led to the suggestion that the video is fake. After all, they’re right. At 500mm, moving back a metre or so probably wouldn’t make that much difference to the shot.

One commenter said, “Just put it in some rice and it’ll be fine”. I admit I might’ve laughed a little at this, having drowned several Nikon & Yongnuo speedlights as well as a Godox strobe (all of which survived fine after a good drying out).

It is possible, of course, that it could be fake. These lenses are quite heavy, and one would expect it to immediately sink (all the flashes did for me). Of course, there’s air trapped inside these large weather sealed lenses that would need time to escape. Air that would keep the lens buoyant briefly before any real sinking occurred.

Still, whether it’s fake or not, hopefully, most of us will never make a mistake quite this expensive. But it does serve as a good reminder to not only be careful but to always carry backup gear and have good insurance.

« Building your own camera? You can buy Canon’s 120MP APS-H sensor
You can now buy a book that features photos taken by Stanley Kubrick in his teens »