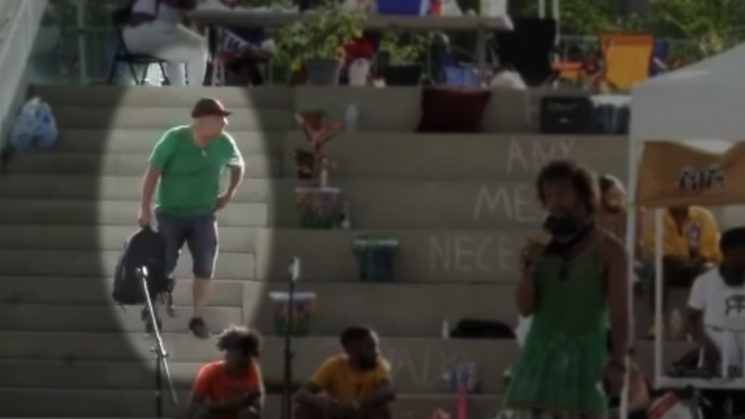 It happens that gear theft gets caught on security cameras. But a very weird footage was captured at an anti-racism rally in Toronto this Sunday. A thief was caught on camera while stealing a backpack full of camera gear – and it was all filmed by the gear’s very owner.

The backpack belongs to producer and videographer Javon Martin, who set up his camera to film the rally. His backpack was on the stairs that were in the frame, so I guess he kept an eye on it. But then a man who was sitting near it started looking around, then he stood up, took the backpack and left.

Global News reports that the backpack contained between $5,000 and $10,000 CAD worth of gear (that’s around $3,680 – $7,350 USD). There were lenses, ND filters, cables, adapters, accessories as well as laptops and hard drives in the backpack. But what’s worse is that the hard drives were full of data. According to Javon himself, some of the material was filmed “even before social distancing.”

According to Global News, Javon said that the police “are aware of the incident.” However, he posted about on his social media without actually filing a report. The reason is reportedly that Javon supports defunding of the police and would prefer those resources to be spent on “supporting people in the black community.”

I honestly find it unusual that a professional videographer doesn’t back up his work, especially if it dates a few months back. I would also never leave my backpack full of gear that far from me, even if it’s in the frame. Still, we all make mistakes and it’s not up to me to judge. Javon appeals to anyone who might know where the backpack is, or who sees some of the gear being sold, to reach out to him.

Photographer Cleverly Captures His Own Proposal With Timelapse Trickery