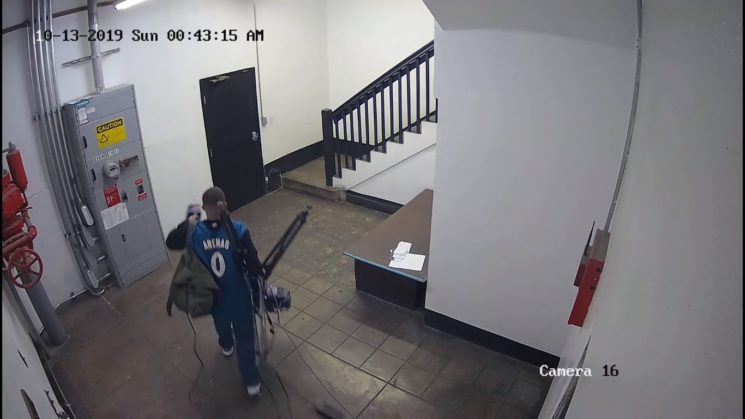 This past weekend, two thieves broke into an L.A. studio. They were filmed by the security camera, and it shows that they only spent six minutes inside. Still, they managed to steal over $100,000 worth of camera gear.

The theft occurred in the night between Saturday and Sunday, shortly after midnight. Director and cinematographer Peter Cote told PetaPixel that the studio is “a warehouse-type building in south-central LA,” with lots of different spaces in it. There are all kinds of artistic tenants in the studio, from musicians and filmmakers to furniture builders.

Peter had lots of his gear stolen – but the most valuable piece is his Phantom Flex4K (serial no. 20089) with a 2TB CineMag in it. The thieves also took a Sony a7R II and “a bunch of Canon and Sigma DSLR lenses,” both vintage and modern. Pete’s asking anyone to be on the lookout and spread the word.

The thieves entered the warehouse using the door code, as you can see in the security camera video, and it’s unclear how they obtained the building’s code. As for Peter’s studio, he says that they used a crowbar to pry open the studio door near the deadbolt.

If you have any information that could help to identify the suspects, or if you recognize them, please contact the Newton station of the Los Angeles Police Department. And even if not, be on the lookout for the Phantom Flex4K with serial no. 20089.

I got $5,000 worth of gear stolen from me through Fat Llama